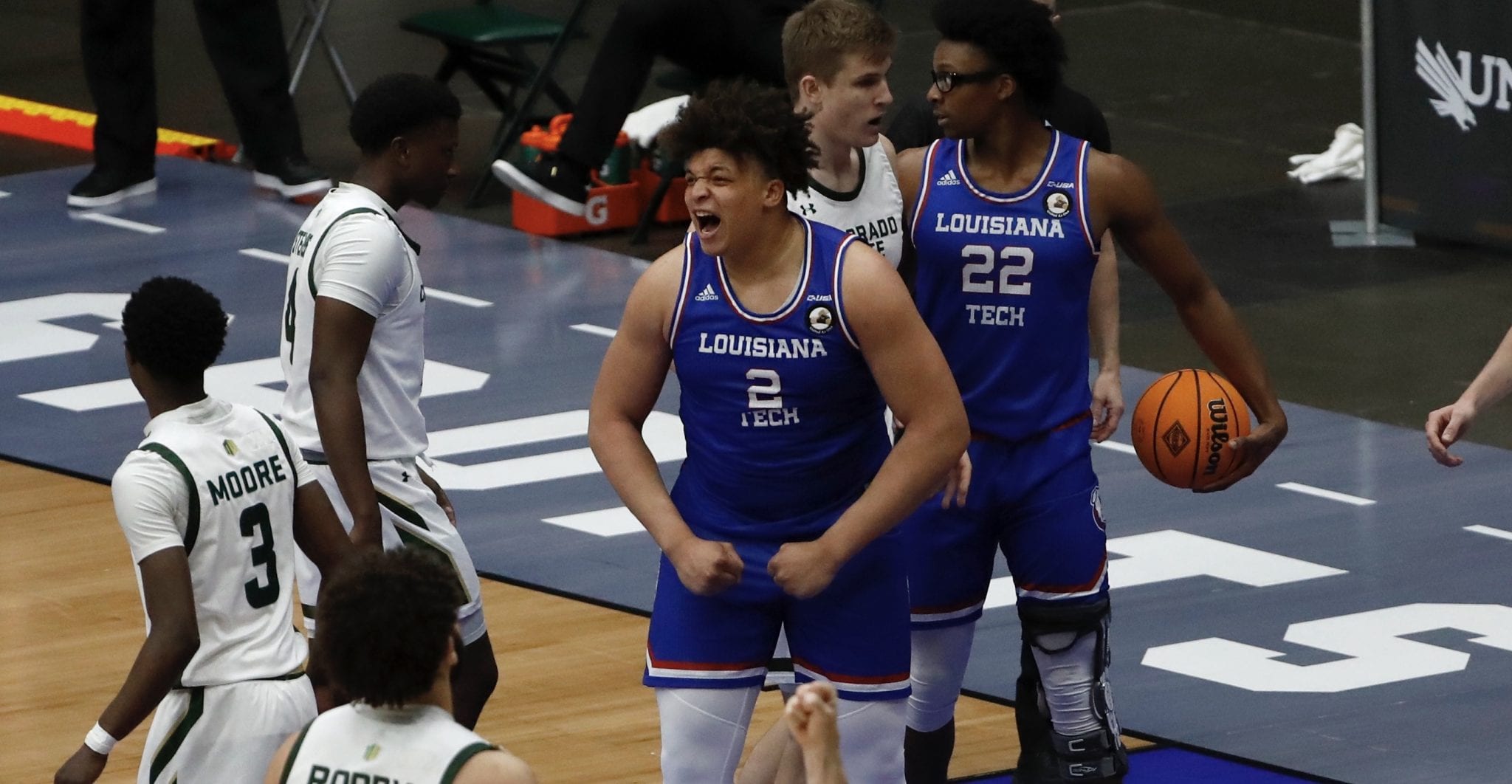 FRISCO, Texas – A year ago, Louisiana Tech ended the season on a win and it was miserable.

The sudden shutdown of college basketball made it so.

Fast forward to 2021 and LA Tech ended the season on yet another victory.

It was a mass celebration this time around as the team surrounded Kenneth Lofton, Jr. who scored the game-winning bucket with 0.3 seconds left to lift the Bulldogs to a 76-74 victory over Colorado State on Sunday in the NIT consolation game inside the Comerica Center.

The freshman capped off an incredible tournament, pouring in a career-high 27 points to go along with 13 rebounds.

He was unstoppable.  He was relentless.  He was playing bully ball, especially on his 10th and final made field goal.

“That is how coach drew it up,” said Lofton, Jr. who was voted to the NIT All-Tournament Team after averaging 20.0 points and 9.3 rebounds over the four games.  “He told me to rip it and go to the goal.”

Rip it he did.

With the game tied at 74-74, the Bulldogs had the ball with 14 seconds remaining.  Amorie Archibald dribbled half of that off the clock, then dumped off a bounce pass to Lofton, Jr. at the elbow.  The forward went one-on-one with his defender, knifed through traffic down the middle of the lane and finished strong with his left hand.

“It was a great win for our team,” said head coach Eric Konkol.  “I am so proud of our guys.  Their mental resolve and competitiveness really showed coming off yesterday’s loss.  We had to quickly regroup and get ready to face a very good Colorado State team.  We kept chipping away and found a way to come away with a great win to end the season.”

The ‘Dogs needed to dig deep, playing in their third game in the past four days and their 32nd overall of the season.  After Isaiah Crawford sank a floater in the lane, the momentum began to sway.

After Lofton, Jr. netted a free throw and a layup at the rim, LA Tech went to the perimeter to continue the run.  Kalob Ledoux drained back-to-back triples to tie it up at 64-64, then Archibald swished a corner three in front of the team bench to give the Bulldogs their first lead of the game with 5:03 to go.

Ledoux and Archibald continued their offensive scoring, combining for seven more points to build a 74-69 advantage at the 1:55 mark.  The Rams, who went 17-of-23 from the foul line, made three of them down the stretch and tied it up when they took advantage of the ‘Dogs 16th turnover and got a fastbreak layup to go.

Coach Konkol called a timeout with 14 seconds, drew up the play for Lofton, Jr., and the rest is history.

“Through this whole season, I was grateful for the opportunity to play basketball and enjoyed every moment with my teammates,” said Archibald.  “Getting this far was an amazing accomplishment for us.”

It was the largest comeback of the season, eclipsing the 10-point comeback against Ole Miss in the first round.  Archibald and Ledoux each had 14 points and Crawford added 13.  The team shot 50.0 percent from the field (30-of-60).

CSU went 23-of-51 from the field for 40.7 percent while hitting 11 three-pointers.  Isaiah Stevens led the Rams with 18 points.