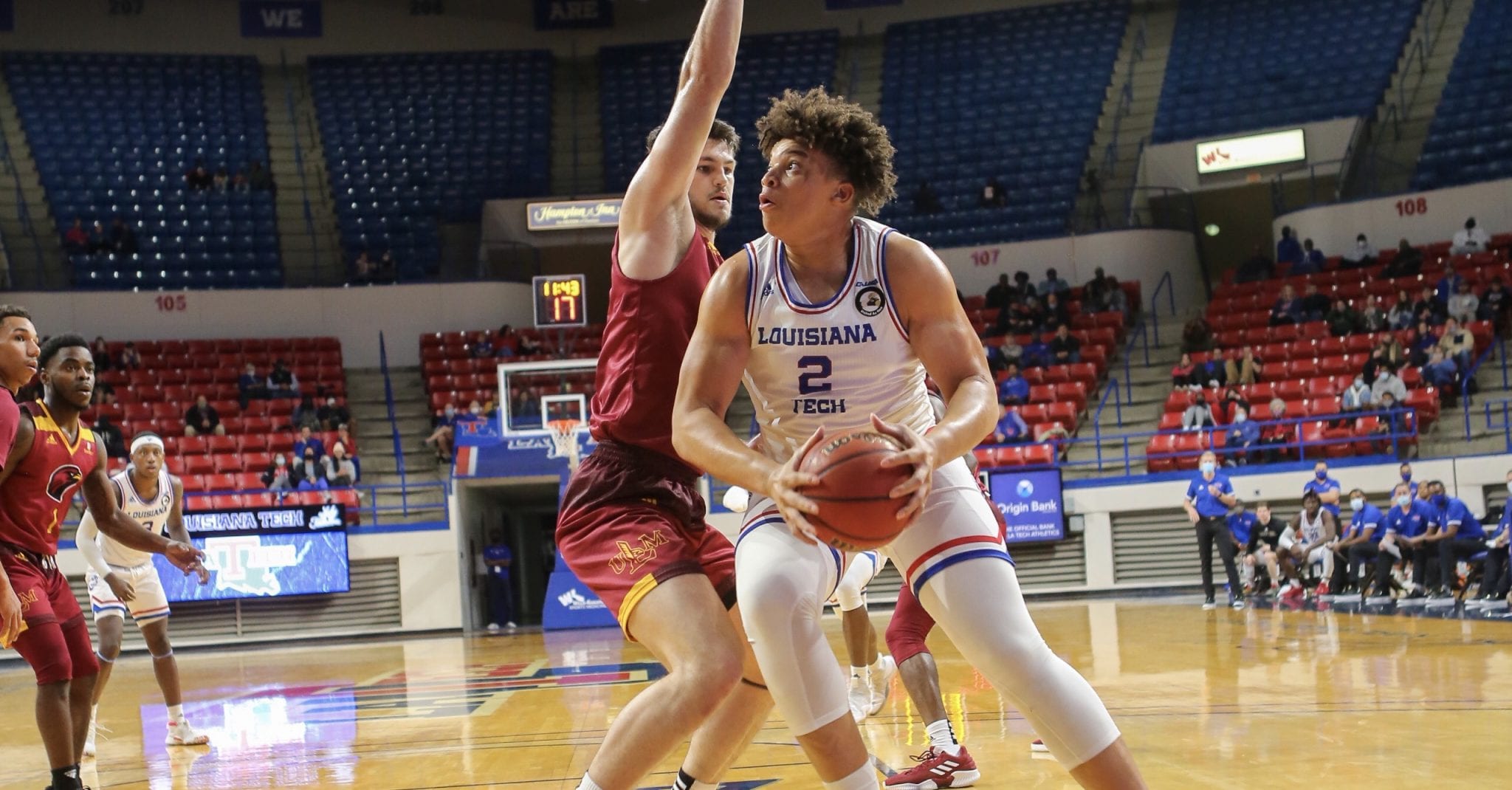 RUSTON – The Thomas Assembly Center has seen a lot of wins since it opened in 1982.

Having recently celebrated its 38th birthday, the Louisiana Tech men’s basketball team also celebrated in delivering win No. 400 in the building to the tune of a wire-to-wire 78-62 victory over ULM on Thursday night on Karl Malone Court.

LA Tech (3-0) jumped out to a 12-2 lead, thanks to three early three-pointers by Cobe Williams, and never trailed as the sophomore point guard was one of five Bulldogs that lead the balanced-scoring attack.

“We talked about getting off to a good start.  We talked about it on the defensive end to get stops and have those stops turn into good offensive plays,” said head coach Eric Konkol.

ULM (0-1), playing in its first game of the season, shook off some rust after calling an early timeout down nine.  Russell Harrison sparked the Warhawks, scoring eight of their next 13 points to get to within one at 19-18 with 9:15 remaining.

However, the Bulldogs countered by making 11 of their next 14 shots as a team.  It was a series that began with back-to-back threes by Isaiah Crawford and Amorie Archibald and ended with back-to-back midrange jumpers by Williams.

No. 24 netted a career-high 14 points, all in the first half, to help give the ‘Dogs a 45-31 advantage at halftime.  Getting equally as hot in the second half was Kalob Ledoux, who after going scoreless through the first period, erupted for a game-high 15 points.

The senior started the frame with an old-fashioned three-point play and proceeded to knock down two triples from downtown as he scored all 15 during a stretch of nine minutes.  His final three gave LA Tech a 68-47 lead with 12:02 to go and the team cruised from there.

Something new for JaColby Pemberton was the senior getting his first start of the season.  Something not new was that he recorded another double-double with 12 points and a game-high 11 rebounds.

“I’m just playing hard and taking it one game at a time. I don’t think about it. I just go out there and play as hard as I can to get the win.”

Not to be outdone, Kenneth Lofton Jr. notched his first career double-double as the freshman bullied his way to 10 points and a career-high 10 rebounds.  Archibald was the fifth Bulldog in double-figures with 11 points, all coming in the first half.

“We want to be a team that’s got a multifaceted attack, inside and outside, off the dribble and catch and shoots,” said Konkol.  “Just over time, it’s rare to see just one player carry a team to great heights as a team, so we want to keep developing our group.  I think the versatility of this group could be its greatest strength.”

LA Tech turned it over an uncharacteristic 17 times, but they dominated the glass with a +23 rebounding margin.  The shooting numbers were solid as well, going 29-of-60 for 48.3 percent from the field and 9-of-25 from beyond the arc for 36.0 percent.

Next up for LA Tech is its first road game of the season.  The Bulldogs will travel down to Baton Rouge to take on the LSU Tigers on Sunday, Dec. 6 at 5 p.m.  The game will be televised on the SEC Network.