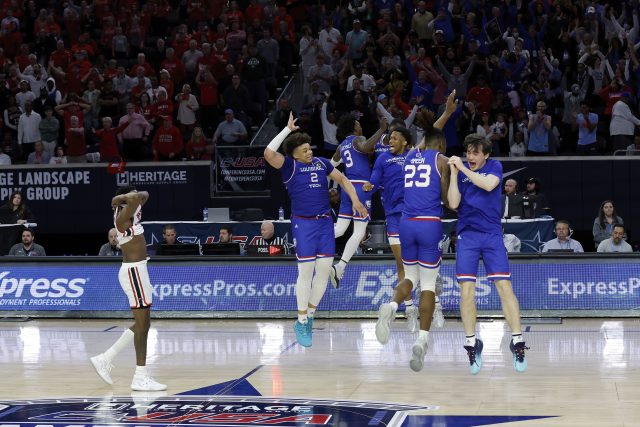 Basically, the same scenario played out on Thursday night in the C-USA Tournament quarterfinals as Junior sank a free throw with six seconds left and a last-second heave by the Hilltoppers was off target as the Bulldogs squeaked out a 59-57 win on Court B of the Ford Center at The Star.

That lead was capped by a David Green three-pointer, one of seven triples by the ‘Dogs in the first stanza, to build a 31-17 advantage with 6:06 to go.  WKU abandoned its zone defense after the hot shooting by Keaston Willis, David Green and others from long range, and started applying more pressure on the basketball.

As a result, the Hilltoppers began to chip away, forcing TOs and finishing the first half on a 9-2 run to slice the deficit down to 36-33 at the midway point.  They tied the game up at 38-38 and eventually took their first lead of the game on a made triple by Josh Anderson to go up 50-49 with 9:36 remaining.

Willis would give the ‘Dogs the lead back with his fifth three-pointer of the game.  After a made jumper by Lofton made it 54-50 in favor of LA Tech, WKU countered with a 7-0 run to take a three-point lead with 3:47 left.

That would be the last time the Hilltoppers score as they missed their last four field goal attempts as well as their last three free throw attempts.  On the flipside, Willis went bank on a running floater and Junior muscled up a layup with 24 seconds remaining to go up one.  He also pulled down a key defensive rebound on a missed free throw by WKU to help close things out.

WKU took 11 more shot attempts, but only managed to shoot 35.6 percent from the field (21-of-59) while making only three three-pointers.  Dayvion McKnight had a game-high 20 points.

“That was a heck of a game.  We talked in the locker room before the game about having great grit and passion.  I thought we came out with some incredible passion.  We were able to attack their zone to get off to a good start.  WKU persevered, then we had to persevere.  We turned the ball over a number of times, did not shoot it great in the second half, but I give this team so much credit of finding a way.  They showed incredible grit and toughness to find a way to win.  It was a hard-fought victory tonight.”

·        LA Tech advances to the C-USA Tournament Semifinals for a second straight season.  This will be their fifth time reaching at least the semifinals.

·        The Bulldogs knocked out the Hilltoppers who had reached the C-USA Tournament finals in each of the last three tourneys.

·        The LA Tech defense held WKU to its worst three-point shooting game of the season at 14.3 percent.

·        Kenneth Lofton, Jr. registered his 17th double-double of the season with 15 points and 12 rebounds.  His 12 boards tied for the second most by a Bulldog in a C-USA Tournament game.

·        Keaston Willis scored a team-high 17 points, draining five three-pointers in the process.  He now has 89 threes on the season, tied for the second most in program history.

·        David Green came off the bench to tally 10 points, his eighth game in double figures.

·        Kenneth Lofton, Jr. also anchored the team in assists with five.  It was the sixth time this season he has had at least five assists in a game (most on the team).

·        Kenneth Lofton, Jr. has led the team in points, rebounds and assists in three straight games (and in six of the last 12 games).

For a second straight year, LA Tech will battle North Texas in the semifinals of the C-USA Tournament.  The matchup is set for Friday, March 11 at 11:30 a.m. and will be nationally televised on CBS Sports Network.