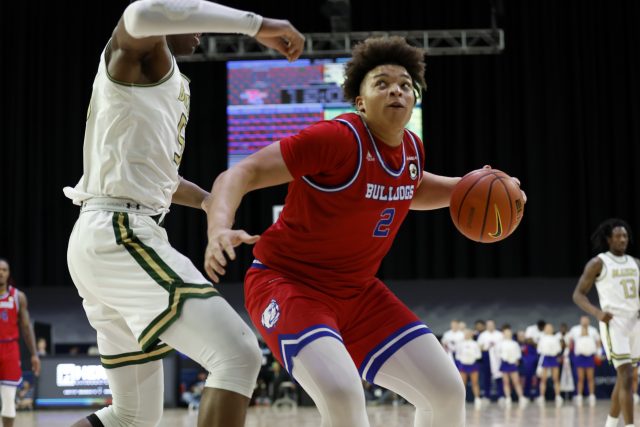 FRISCO, Texas – Louisiana Tech had the daunting task of trying to win four games in four days to claim a C-USA Tournament championship.

They got three, but were not able to get the fourth and final one as they fell 82-73 to UAB on Saturday night inside the Ford Center at The Star.

Foul trouble, offensive rebounding and missed jump shots in the first half plagued LA Tech (24-10).  Four Bulldogs had two fouls in the stanza, including star forward Kenneth Lofton, Jr. who was whistled for his second a little over eight minutes into the game.

At the start of the second half, Junior started going to work down low.  The C-USA All-Tournament Team honoree made eight straight points to get the deficit into single digits, but the Blazers struck back behind two three-pointers by Michael Ertel to increase their lead up to 16 at 57-41 with 13:07 left.

The Bulldogs proceeded to turn things up a notch defensively, applying full court pressure for the remainder of the game.  And it worked.  They ended up forcing 16 turnovers, making it a one-possession game after a three-point play by Lofton made the score 73-70 with 2:07 remaining.

It was part of a stretch where LA Tech made nine straight field goals.  And the defense held UAB to just one made field goal in the final four-plus minutes.  However, the Blazers cashed in at the free throw line as they did the whole game, making seven down the stretch and ultimately going 25-of-31 from the charity stripe.

It was an off-shooting night for the Bulldogs who could not get it going from three in the second half either.  They shot just 4-of-28 from beyond the arc.  The vast majority of their scoring came in the paint where they scored 42 points.  And they attempted 17 free throws, making 11.

Lofton scored a team-high 23 points to go along with a game-high nine rebounds.  Williams provided 19 points and Amorie Archibald, playing in his 156th career game as a Bulldog, added 12.

“UAB is a really good team and spotting them points early, we knew it was going to be a tough hole to dig ourselves out of.  I give our guys a lot of credit.  I am proud of the fight they showed and the resiliency to keep plugging away.  We made it a one-possession game coming down to the last few minutes, but we just were not able to make the plays to get over the hump.”