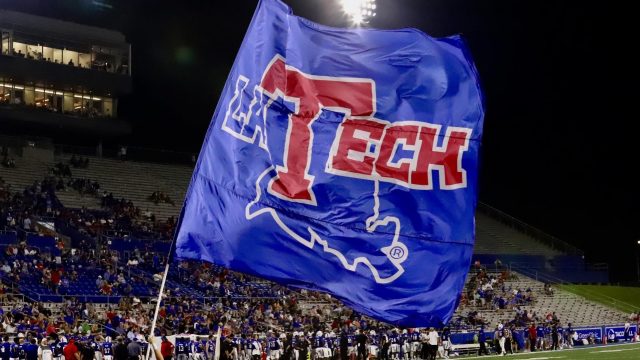 That blitz led to the Bulldogs burning two timeouts, down 33-15 with 9:31 still to go in the first half.  LA Tech trailed by as much as 20 later on the stanza, but settled in defensively the rest of the game to give themselves a chance for a comeback.

Three-pointers by David Green and Amorie Archibald ignited an 8-0 run to get the ‘Dogs to within single digits at 51-42 early in the second half.  The deficit shrunk to six at the 11:22 mark when Kenneth Lofton, Jr.’s fourth steal led to a fast-break layup by Archibald to make it 55-49 in favor of FAU.

Unfortunately, LA Tech went scoreless over the next five-plus minutes, a stretch that saw them commit four costly turnovers.  They managed to slice the deficit down to seven late in the game, but that was as close as they would get.

The Bulldogs shot 43.5 percent from the field (27-62), getting a team-high 18 points from Green.  Lofton, Jr. anchored the team in the other categories, finishing with 16 points, 14 rebounds, six assists and four steals.  Cobe Williams and Keaston Willis were the two other ‘Dogs in double figures with 13 and 12, respectively.

Despite only making 12 of their 32 field goal attempts after the opening onslaught, the Owls shot 52.0 percent from the field (26-50) and made 10 three-pointers.  Four FAU players scored double-digit points, led by Alijah Martin who had 21 (17 came in the first half).

“Florida Atlantic got off to a great start and we really had no answer early in the game.  Their pace was impressive and they made a lot of shots, some open and some not open.  When they got in that groove, it was hard to stop.”

·        Amorie Archibald set a new program record with his 128th career start as a Bulldog.

·        Kenneth Lofton, Jr. recorded his 13th double-double of the season with 16 points and 14 rebounds.  He has produced a double-double in four straight games.

·        Kenneth Lofton, Jr. also had a career-high six assists and four steals in the game.

·        David Green came off the bench to play a career-high 25 minutes.  He ended up scoring a team-high 18 points, marking the third time this season he has anchored the squad in scoring.

·        Keaston Willis scored 12 points while making two three-pointers.  He now has 57 made threes on the season and has made at least two triples in six straight games.

LA Tech heads to Miami to face FIU on Saturday, Feb. 5 at 6 p.m. CT inside the Ocean Bank Convocation Center.  The matchup will be streamed live on ESPN+.