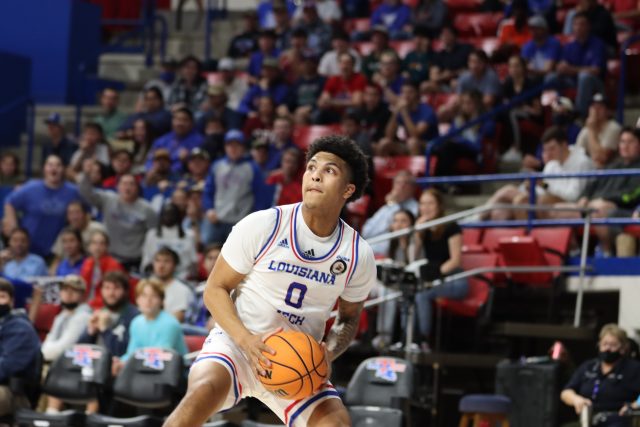 RUSTON – Louisiana Tech remained perfect at home and in conference on Thursday night as they pulled away from Southern Miss in the second half to register an 80-57 victory inside the Thomas Assembly Center on Karl Malone Court.

The Bulldogs finished with a season-high 21 assists and sank 11 three-pointers with 10 of those coming from Keaston Willis, David Green and Cobe Williams.

Green buried all three of his in a three-minute span midway through the second stanza, the final one forcing a timeout by the Golden Eagles as the Bulldogs had a 61-34 advantage with 8:38 to go in the game.  The lead grew to 72-38 with 4:39 remaining.

USM took its only lead of the contest at 15-14, but Willis sparked a 14-0 run with two of his triples.  Holding a 31-24 lead at the midway point, the ‘Dogs used a 13-0 run early in the second stanza before Green started draining three-pointers.

USM shot 37.3 percent from the field (22-of-59) and had three players in double figures, including Tyler Stevenson who finished with a team-high 17 points.

“I thought it was a total team effort for our group.  I did not like the way we ended the second half.  Give a lot of credit to Southern Miss.  They are a hard-playing team.  I really challenged our guys [at halftime] to be more mindful of the things we want to do, play great defense, take care of the basketball and take great shots.  I thought they did a much better job [in the second half] of playing with energy and grit.  Seeing 21 assists is a beautiful sight to see.”

·        LA Tech has now won 17 straight home games versus Southern Miss and improved to 10-0 against the Golden Eagles inside the Thomas Assembly Center.

·        David Green scored 17 points off the bench.  It was his second time in double figures this season.

·        Cobe Williams tallied 12 points, reaching double figures for the eighth time in the last nine games.  The Bulldogs are 17-2 all-time when he scores at least 10 points.

LA Tech now heads to Hattiesburg on Sunday, Jan. 16 to face USM inside Reed Green Coliseum.  Tipoff is set for 2 p.m. CT and will be streamed live on ESPN+.