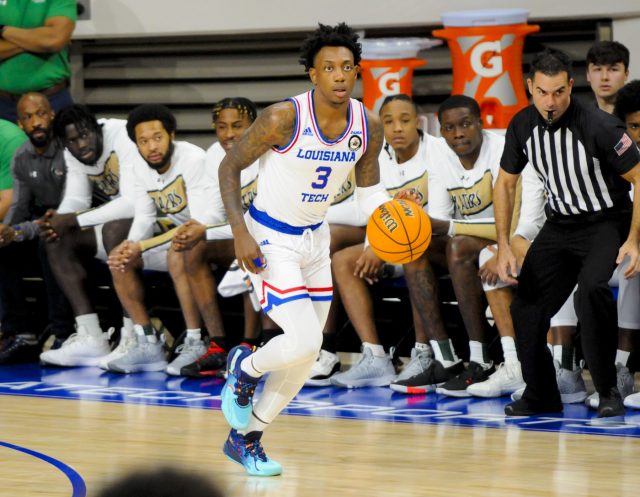 RUSTON – Louisiana Tech had its seven-game winning streak come to an end on Saturday afternoon, falling 83-76 to UAB inside the Thomas Assembly Center on Karl Malone Court.

LA Tech (15-4, 6-1 C-USA) committed 18 turnovers, the second most in a game this season.  Four of them came in the opening two minutes, which quickly put the Bulldogs in a hole, down 15-2 early.

They were behind by as much as 15 in the first half, but Amorie Archibald kept the ‘Dogs in it with six three-pointers in the first stanza.  The sixth one from behind the arc came as the clock expired, cutting the deficit down to eight, 41-33, at the midway point.

After UAB (16-4, 6-1 C-USA) made 16 first-half field goals, the Bulldogs came out strong defensively in the second half.  They forced nine misses on the Blazers first 10 field goal attempts.  As a result, LA Tech was able to claw back and grab its first lead of the game at 50-47 with 13:02 to go on an offensive rebound and putback by Kenny Hunter.

UAB’s Jordan Walker quickly answered with a three-pointer.  And that continued as the Tulane transfer sank nine of them from deep in route to a game-high 36 points.

LA Tech was close to overcoming another double-digit deficit, down 65-55 with eight minutes to go.  Archibald’s seventh three of the game cut the deficit down to three at 76-73 with 2:31 remaining.  That was as close as the Bulldogs would get in the final minutes, missing a trio of free throws while Walker put the game away for the Blazers at the foul line.

“We are obviously disappointed.  Give a lot of credit to UAB.  They played very well today.  I thought we played well in moments, but the moments we did not they capitalized on.  You never want to feel like you have to outscore somebody and we were struggling to get stops.  I thought we played some really good desperation mode there in the end.  We had a hard time stopping them.  We were turning the ball over and that led to easy shots for them.  It comes down to execution and thought they executed a little bit better than us.”

·        With the 83-76 loss, the LA Tech-UAB series is now tied up at 9-9.  The Bulldogs had their 18-game home winning streak and their seven-game overall winning streak snapped.

·        With the loss, LA Tech is now 6-1 in Conference USA, which puts them in a current tie with UAB for the West Division lead.

·        LA Tech registered 10 steals on the day, tied for the second most in a single game this season.

·        Amorie Archibald made his 141st career appearance as a Bulldog, setting a new program record.  He has started in 75 straight games.

·        Amorie Archibald scored a team-high 27 points, the second most of his career in a single game behind only his 31-point effort at UTSA earlier this season.

·        Amorie Archibald moved into 20th on the all-time career scoring list after today’s performance.  He now has 1,475 career points as a Bulldog.

·        Amorie Archibald made a career-high seven three-pointers.  He became the seventh Bulldog in program history to make at least seven threes in a single game.

Amorie Archibald now has 203 made triples for his career, becoming the sixth player in school history to eclipse 200.