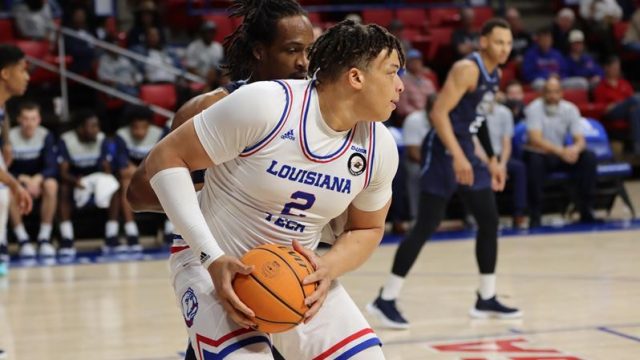 Lofton, Jr. was voted First Team All-Conference USA while Williams was named All-Conference USA Honorable Mention as well as a member on the All-Defensive Team.  Stewart was one of five true freshmen selected to the All-Freshman Team.

Lofton, Jr. currently leads LA Tech in scoring with an average of 16.4 points per game (fifth most in C-USA), having recorded 25 double-digit scoring games as well as eight 20-point performances while shooting 54.0 percent from the field (second best in C-USA).

The power forward, who was a Third Team All-C-USA selection last season, is also averaging a league-best 10.5 rebounds per game, which ranks 10th in the country.  He has totaled 16 double-doubles, which is the ninth most in the nation.  He is currently the only player in Division I men’s college basketball to have amassed at least 475 points, 300 rebounds, 80 assists, 35 steals and 20 blocks.

Not only did the Port Arthur, Texas native average a double-double during conference play (15.3 points and 10.8 rebounds), he was also one of just four C-USA players to tally at least 65 assists and 25 steals during league action.

Williams was one of 10 players to receive Honorable Mention honors after having a stellar season during conference play.  After averaging 7.4 points during non-conference, the point guard ended up averaging over 14.0 points per game during C-USA play (17th-best in the league) while shooting 42.1 percent from the field and 38.3 percent from beyond the arc.

The Dallas, Texas native has scored in double figures 18 times this season (17 in his last 22 games).  For the season, he also anchored the Bulldogs in assists with 97, which ranked 14th in C-USA.

And for a second straight season, Williams was one of five players to be named All-Defensive Team (third Bulldog along with Michale Kyser and Speedy Smith to be a two-time selection).  He has totaled 35 steals this season while anchoring a LA Tech defense that ranks No. 2 in defensive efficiency in conference.

Stewart becomes the fifth Bulldog in program history to be named to the C-USA All-Freshman Team.  The Atascocita, Texas native has averaged 11.3 minutes per game this season.  He has totaled 93 points scored while shooting 38.9 percent from the field, a perfect 9-for-9 from the foul line and has a team-best 2.3 assist/turnover ratio (23 assists to 10 turnovers).

LA Tech begins postseason play on Wednesday, March 9 against the winner of FIU and Marshall.  Tipoff is set for 6 p.m. CT at the Ford Center at The Star and will be streamed live on ESPN+.