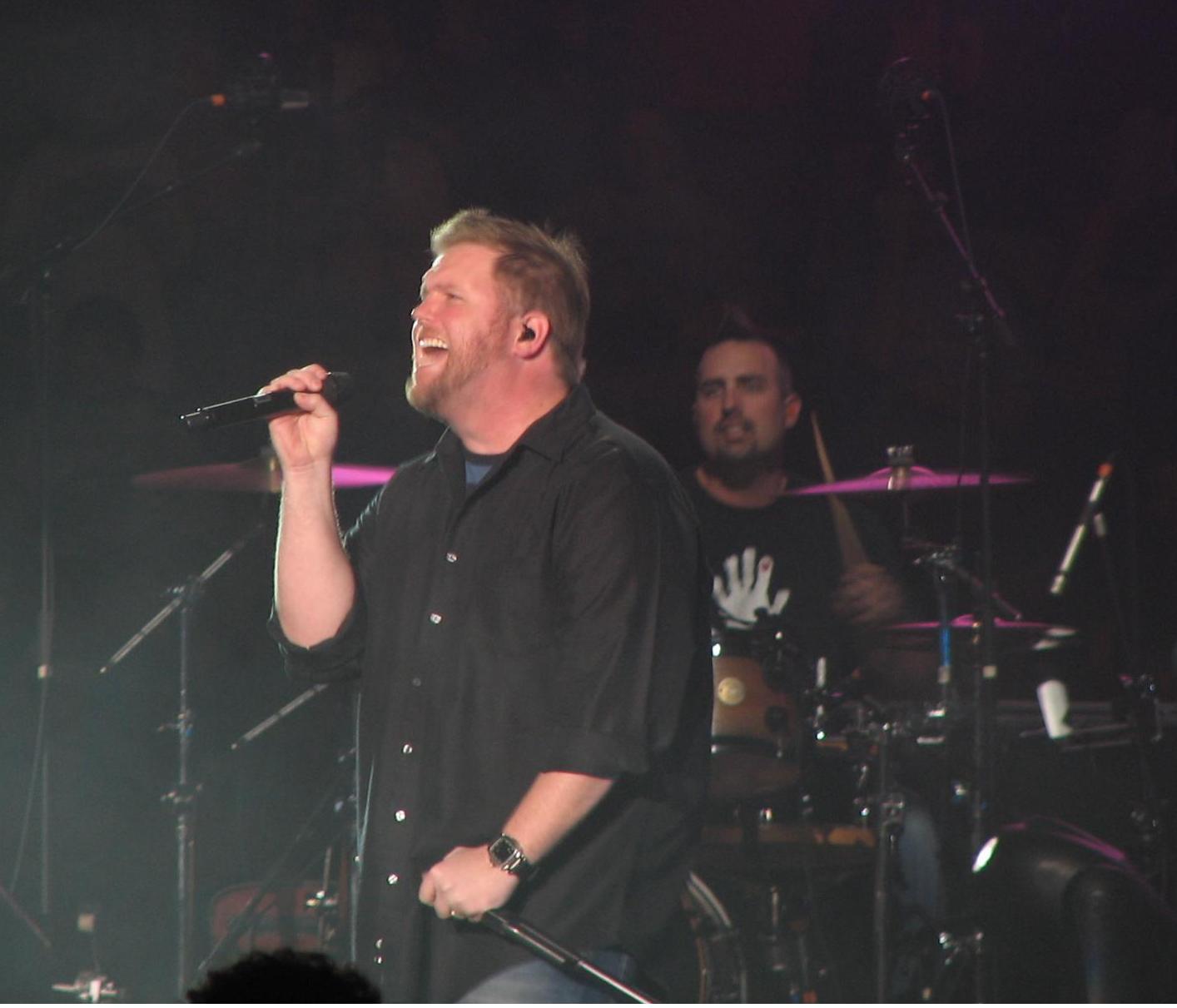 Story by Tom Pace, special to the Press-Tribune

Contemporary Christian music fans across the Ark-La-Tex are eagerly awaiting the return of MercyMe to Shreveport this Friday night at the Hirsch Memorial Coliseum.

Kicking off their “Welcome to the New” Tour, the five-man band will feature opening acts Jamie Grace and Citizen Way.

The show is being presented buy The Promise 90.7FM, The Miracle 89.1FM, and Young Life Christian Ministry. Tickets are $25, $30 & $40…available at the door and on www.statefairoflouisiana.com or www.mercyme.com

When MercyMe lead singer Bart Millard talks about the band’s latest album, “Welcome to the New”, it’s with the passion of an artist rejuvenated and reborn. He’s proud of the lively, spirited rock vibe that drives many of the 10 tracks. He’s still basking in the glow of the recording sessions, where he and his bandmates left their comfort zone and stretched the boundaries of the MercyMe sound.

But when he talks about the overarching theme of Welcome To The New (Fair Trade) Millard gets especially fervent. And here’s why: “New” is the fruit of his real-life embrace of grace. It all adds up to a musical, lyrical and spiritual turning point—that most rare of trifectas for a beloved veteran act that’s been at it since 1994, and has four gold albums and a platinum

disc to its credit.

Simply put: If Millard asked big questions on 2012’s “The Hurt & The Healer”, then “Welcome To The New” steps out boldly with a bigger answer that he didn’t find so much as it found him. (More on that in a bit.)

“The last album was about needing a full-blown collision with the healer—when my family was hanging on by a thread, my cousin who was a firefighter died, and I wrote the title song in 10 minutes in a concert arena, in tears,” Millard recalls.

“I was thinking, ‘Why we do we go though this mess, this junk in our lives? Is there any chance that what I’m going though is not in vain?’

And, “Welcome to the New” is the answer to that song: It’s where we landed after the collision. And we didn’t go through it in vain. I feel like the gospel has come to life for the first time.”

You can hear Millard’s conviction in the album closer “Dear Younger Me,” a song he considers the most personally meaningful on “New.” Built around an organic, slapped percussion loop and plaintive swells of electric guitar, the song is framed “like a letter to my younger self. I was physically abused as a kid and I’ve had a chance to play this song for people who’ve been through similar things.

This is the one song I hope brings a lot of healing to people.” Wrestling with how to encourage and bolster his younger self, Millard lands on this refrain: “You are holy / you are righteous / you are one of the redeemed / set apart / a brand new heart / you are free indeed.”

Yet from start to finish, MercyMe wraps the “New” message in music that’s infectious and inventive. The track “Greater” shows the band taking delightful chances and succeeding.

Imagine shades of the Lumineers, Creedence Clearwater Revival, and the “O Brother Where Art Thou” soundtrack, then throw the result into full gallop under a big sky: “Bring your doubts, bring your fears / Bring your hurt, bring your tears / There’ll be no condemnation

here / You are holy, righteous and redeemed.”

“If there was one song that musically and spiritually represents the place where we are, the grace message of joy, ‘Greater’ is it,” Millard notes.

Then there’s the song “Shake,” the first hit single from “New” and a throwback to the days of INXS and their most funky, danceable material.

“We thought it was a great way to kick off the record,” Millard says. “It’s a little bit of a departure from what we do.” Actually, it was a

big departure for Millard when it came to showing off his moves for the music video. “I grew up Southern Baptist which means I would be banished if I were to learn how to dance,” he says, laughing. “But we figured that everyone has at least a good shimmy in them. Even my grandmother, she can shake it.”

And the theme of rebirth shows MercyMe putting its best foot forward: “Brand new looks so good on you / So shake like you are changed.”

Millard is quick to praise his longtime bandmates for their willingness to explore and expand (Nathan Cochran on bass; Michael John Scheuchzer and Barry Graul on guitars; and Robin Troy “Robby” Shaffer on drums).

title. “This was our first time working with them, and fitting along the vein of being new, we tried it and just loved it,” Millard says. “It’s like they’re an extension of MercyMe now.”

When you’re in a band this long, it gets to the point where you get in the room with the guys and the same stuff comes out. We just wanted someone to stretch us,” said Millard.

And stretch they did. While the Nashville studio settings were certainly familiar (Ocean Way on Music Row and Dark Horse Studios in Franklin), the process certainly wasn’t for Millard and company.

“We would track the drums and the bass, and then each musician would create parts on their very own,” Millard says. “Some of the songs had as many as 100 tracks of background vocals, and the producers gave us an environment where we didn’t feel like we could do anything wrong. We were chasing rabbits like crazy—nothing to lose and everything to gain.”

“It was like kids being in a garage again playing music for the first time.”

That’s apt considering that Millard feels, by his own admission, akin to a spiritual beginner these days.

While some Christians may understand the concept of grace with glad hearts and open minds, Millard admits that for him, it’s been a much different story. “I grew up with a legalistic background, and even though it was all about grace, there were always three more things you could do to make life better. But of course, I’d do 10: I was an overachiever.That’s why I started a band; if we weren’t giving God our best, he wasn’t happy with us.”

That relentless drive almost finished the band as well. Burned out from giving so much of his life and energy to MercyMe, and feeling as though he fell short somehow, Millard was ready to turn in his resignation and “go work at a Home Depot or something.”

That’s when an old friend—a youth pastor from the first church camp MercyMe played 20 years ago—popped back into his life with a most unexpected message. “He said, ’There is nothing in our life to make Christ love us any more than he does.’ And I thought that was a novel concept, but I didn’t buy it: I have a wretched heart, and I’m nothing without God. But then he said, ‘Because of the cross you are a brand new creation.”

“You can’t worry about the heart that can’t be trusted. You have a brand new heart and mind in Christ. And I thought, ‘Wow, that’s something I never heard growing up. There’s no way I can sabotage this.’”

So yes, Millard stayed on with MercyMe, and it’s a wonderful thing he did. “Welcome To The New” brings on the reboot in fine style, but not in such a way to kick the band’s loyal fans into a wholly unfamiliar space. And if the singer sounds full of joy on this new disc, it’s because he most definitely is.

“We’ve never been more comfortable in our skin and focused

on the message,” he says. “I am not a tortured soul on this album.”