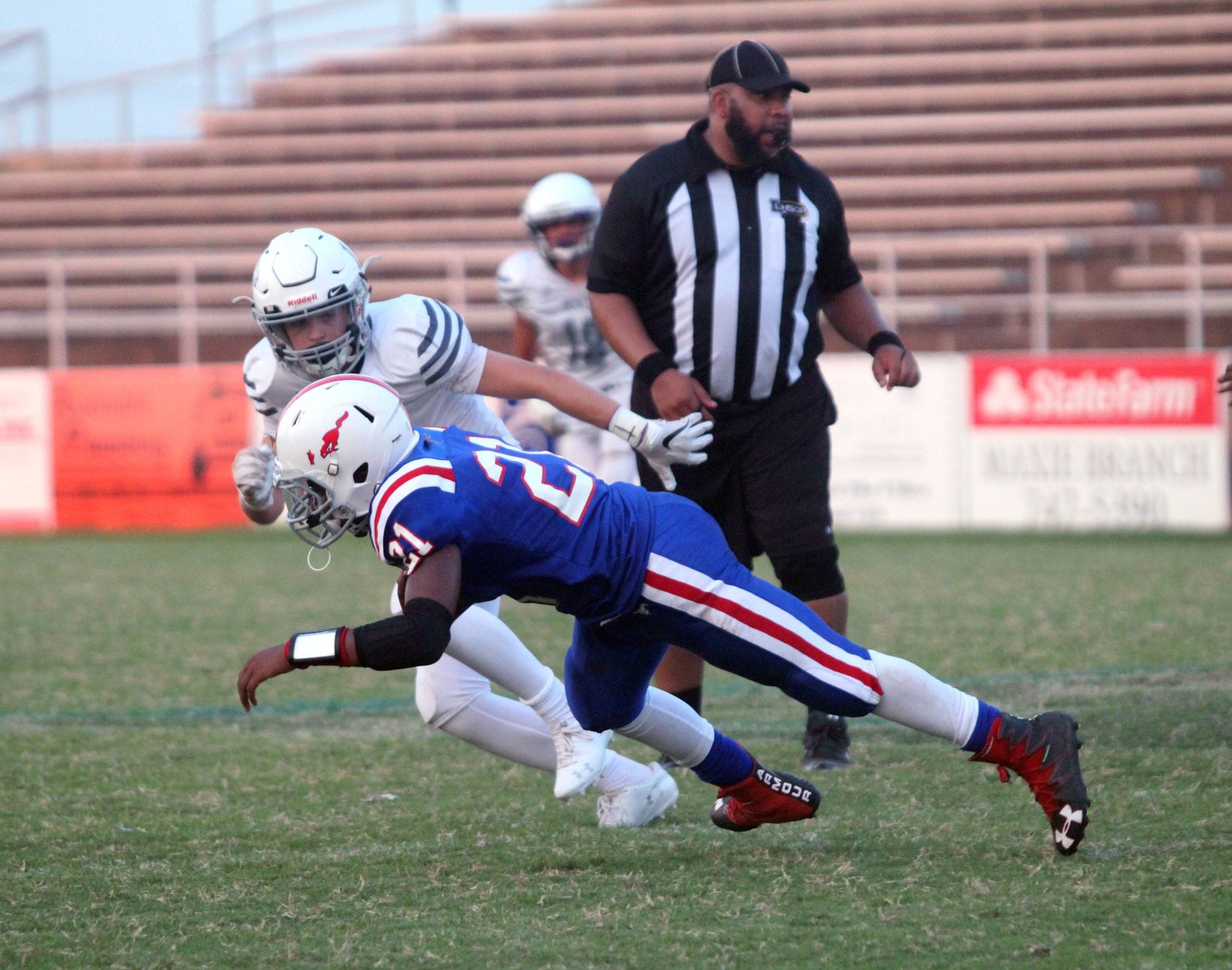 In hard-fought games involving evenly matched teams, Benton edged Greenacres 14-12 in the seventh-grade game and 14-13 in the eighth-grade game at M.D. Ray Field at Airline Stadium.

At Airline Stadium, Benton scored touchdowns late in each half in the seventh-grade game.

Greenacres scored first in the second quarter on a perfectly-executed 35-yard flea-flicker pass from running back Le’Brandon Davis to Roland Wilkinson. The try for two failed.

Benton scored on the final play of the half on Jeffrey King’s pass to Bryson Pierce. Gregory Manning ran for the two-point conversion to give the Tigers an 8-6 lead.

Zitravion Brown’s touchdown run with 4:54 left in the game put the Mustangs back on top. Benton stopped the two-point conversion attempt again.

Manning then put the Tigers in scoring position with a kickoff return to the Greenacres 21. On fourth-and-goal from the two with 1:03 left, he bulled his way into the end zone surrounded by Tigers and Mustangs. Greenacres stopped the two-point conversion attempt.

Davis and Brown combined to run for 100 yards. Braden Adams intercepted a pass on the opening drive.

“We came out to a fast start, but stalled against a good defense in the second half,” coach Chris Skinner said.

Players on both teams fought hard on an extremely hot afternoon with temperatures in the high ’90s.

Greenacres scored first in the eighth-grade game on an 84-yard run by Justin Epps after the Mustangs recorded a sack on fourth-and-goal. Alex Vasquez kicked the PAT.

Benton came right back, though, scoring on a 70-yard pass from Gray Walters to Pierce Russell. The two-point conversion attempt failed.

After the Mustangs went up 13-7 on another Epps’ TD run, Kylin Jackson ran for a touchdown to give the Tigers the lead. Walters completed a pass to Russell for the decisive two-point conversion.

“They were all over the place,” he said. “Just like in the seventh-grade game, we came out strong early but struggled to execute once Benton made defensive adjustments.”

Russell had an interception in the first half along with his touchdown reception.

Benton and Greenacres are both 2-1 overall and 1-1 in district.

At Bossier, Cope rolled up 252 yards total offense in the seventh-grade victory.

Trey Jackson rushed for 129 yards on six carries and scored two touchdowns. Markell Hampton gained 53 yards on two carries, both of them resulting in touchdowns. He also scored a two-point conversion.

Hampton was also a standout on defense, forcing one fumble and recovering one. Brandon Sanders forced a fumble, and Rylie Bryan recovered one.

Coach Ray Smith praised the play of all the members of the Cougars’ offensive backfield. Jeremiah Boudreaux was among the defensive standouts along with Hampton and Sanders.

Cope improved to 2-0 overall. It was the Cougars’ district opener.

Katerius Norris scored two touchdowns and a conversion for the victorious Cope eighth-grade team. Jakarvis Guice scored the other conversion.

The Cougars led 8-0 at the half and then scored another touchdown and conversion in the third quarter to go up 16-0.

Johnson connected with Quitavious Williams for a 25-yard gain in the third quarter. Cameron Smith also had a 40-yard run.

The defense was led by Ball, John Ecot and Connor Blank. All three had interceptions.

At Minden, the Elm Grove eighth-grade team improved to 3-0 and the seventh-grade team raised its record to 2-1 with its second straight victory.

NOTE: The above report is based on information provided by coaches and the observations of the reporter. It will be updated if more information is received.