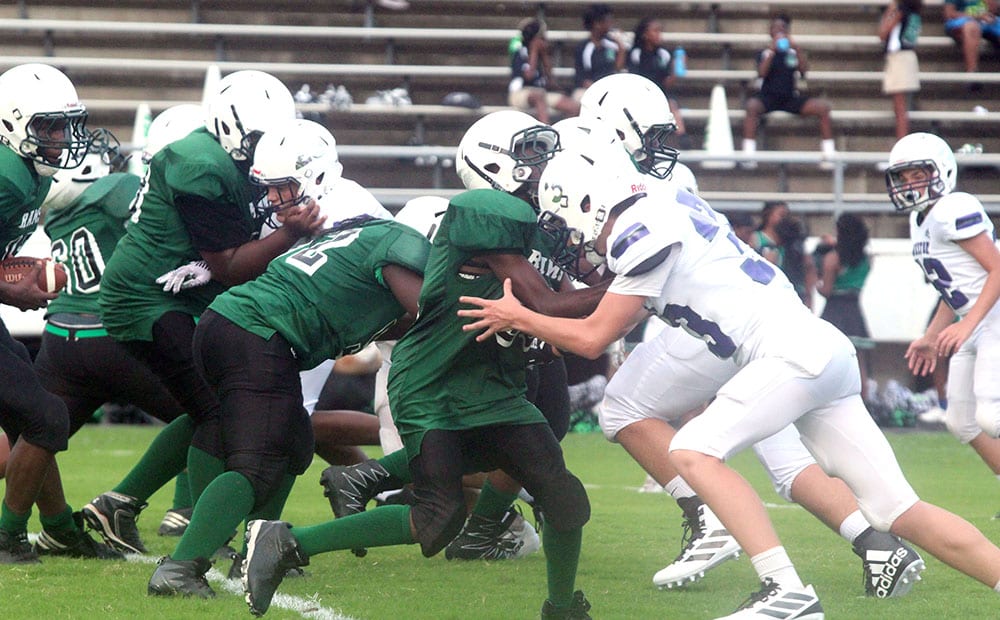 Benton defeated Rusheon 30-6 in the opener. In a very competitive second game, Greenacres rallied past Haughton 22-14.

In the finale, Elm Grove and Cope played to a 6-6 tie.

Manning and Pierce caught two-point conversion passes from King.
Behind the running and passing of quarterback Keyshun T. Johnson, Rusheon reached the Benton 2 just before time expired in the first eight-minute half.

Johnson had one of the jamboree’s most exciting plays, breaking tackles and zigzagging his way for a TD run of about 70 yards in the second half.
In the second game, Haughton quarterback Jalen Lewis suffered a broken leg and is lost for the season, coach Darin Walker said.

On the play after Lewis was taken off the field on a gurney, Haughton’s Bryson Hinkie sprinted 70 yards for a touchdown to tie the score at 6. Brayden Stovall’s two-point conversion run gave the Bucs an 8-6 lead.

Haughton took a 14-6 lead on Jason Zahm’s interception return for a touchdown.

Greenacres’ LaDarius Epps then hit Jaxon Graham for 80 yards and a touchdown to tie it.

Joshua Baker scored the go-ahead TD on a 5-yard run with just under three minutes left. Epps had a 30-yard run on the drive.

In the nightcap, Cope kept the ball for most of the first half. But Elm Grove scored the only touchdown on an 80-yard run by Greg Chitman.

Cope’s Trevon Jackson had a TD run erased by a holding penalty. Jeremiah Boudreaux’s short touchdown run tied it in the second half.

Note: Any results of Thursday’s seventh-grade jamboree reported to The Press-Tribune will be added to this report. Look for regular season coverage to begin next week.