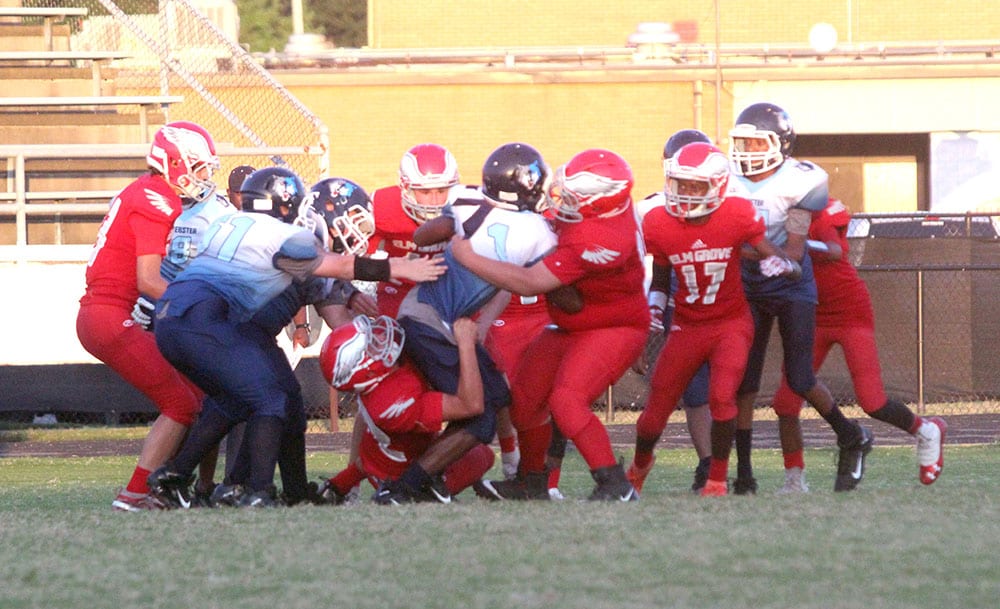 Also in non-district play, Haughton and North DeSoto split games at Harold E. Harlan Stadium. The Bucs won the eighth-game 28-6 and the Griffins won the seventh 14-0.

At Preston Crownover Stadium, Webster took an 8-0 lead in the seventh-grade game on a touchdown pass and two-point conversion with about 30 seconds left in the first half.

The Eagles rallied in the third quarter. Carter Wells scored from 6 yards out and Greg Chitman tied it with a two-point conversion run.

Webster led the seventh-grade game 2-0 at the half. The Eagles played well defensively in the second, but the Wolves broke two long runs to pull away.

At Airline, Trey Jackson rushed for 81 yards on eight carries and scored on runs of 51 and 10 yards in Cope’s eighth-grade victory.

Jeremiah Boudreaux also had a big game, rushing for 91 yards on seven carries. He scored on an 18-yard run and added a two-point conversion.

Sincere Walker scored on a 5-yard run. He also scored two conversions on a run and reception.

Champ Endris returned an interception 25 yards for a touchdown.

Walker, Endris, Jackson, Jose Para and Kennedy Calhoun were named the defensive players of the game by coaches.

Chase Tolbert ran for a conversion. Stovall connected with Amarion Lars for one.

Landon Gaby was a defensive standout in the seventh-grade game.

At Benton, Greenacres’ Christian Moore returned an interception for a touchdown in the seventh-grade game.

Greenacres’ Jaxon Graham, Michael Adler and Aydin Ashworth were cited for their defensive play up front against Benton’s running game in the eighth-grade game.

Graham scored the Mustangs’ touchdown on a kickoff return. He also had a couple of TDs called back due to penalties.

Gabe Laval had an interception. Turnovers hurt the Mustangs.