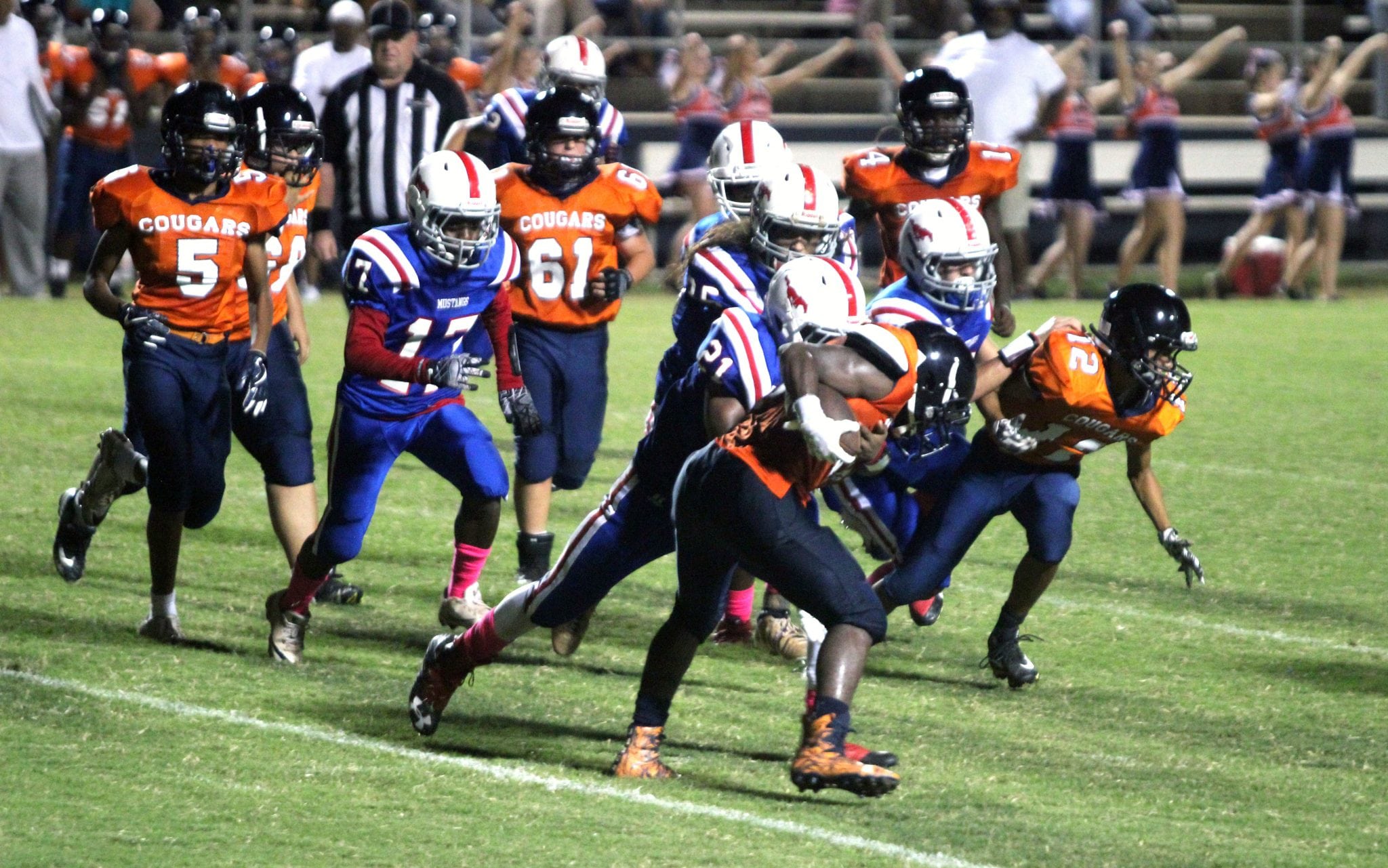 Haughton swept Rusheon at Haughton. The Bucs won the seventh-grade game 38-12 and the eighth-grade game 42-24.

Cope swept Greenacres at M.D. Ray Field at Airline Stadium. The Cougars won the seventh-grade game 26-0 and the eighth-grade game 30-13.

In a non-district game, the Elm Grove eighth-grade team raised its record to 4-0 with a 20-8 victory over North DeSoto in Stonewall. The Eagles dropped a tough 30-24 decision in the seventh-grade game.

In other non-district contests, the Benton Tigers swept Webster at Minden, taking the seventh-grade game 44-6 and the eighth-grade game 33-20.

At Airline, Cope took advantage of some big plays to win the seventh-grade game.

The Cougars rolled up 252 yards on total offense.

Trevon Jackson carried eight times for 184 yards and scored twice, both on long runs, including one of 75 yards. He also had 20 yards in returns.

Markell Hampton carried the ball just twice and scored both times, including a 35-yard dash. Jackson and Hampton were named the offensive players of the games by coaches.

Sincere Walker and Champ Endris, named the defensive players of the game, combined for 11 tackles. Braydon Linton had one forced fumble and recovery. Hampton had an interception.

The special teams players of the game were kicker Kyler Hively and Donta LaCour, who had two tackles and an assist.

The Mustangs were able to sustain some drives. They kept the ball the entire first quarter. But the Cougars were able to come up with some key stops.

“Great rivalry game between the future Vikings,” Cope coach Ray Smith said. “Our defense gave up some big plays but luckily didn’t break. We did get lucky on the kickoff that was called back for a block in the back. Give credit to our kids who had a sluggish start in the first quarter who played hard the entire game.”

Kameron Allen had one touchdown and one two-point conversion.

Jayden Walker had two interceptions. Carter Tate had five tackles and one sack. Jeremiah Blaze had an interception.

Greenacres took an early lead on a pass from Nick Vascocu to Daxton Chavez. Alex Vasquez booted the PAT.

Justin Epps ran for 110 yards and a TD. Mark Engelke recorded one interception.

Both Cope teams improved to 4-0 overall and 2-0 in district.

Cayden Hinkie, Connor Blank and Dexter Smith were on the receiving end of those passes.

Blank also shined on defense with an interception. Jesse Normandin was also cited for his play.

Amarion Lars scored a pair of touchdowns in Haughton’s seventh-grade victory. He caught a TD pass from Jalen Lewis and ran for a score.

Lewis also scored a rushing touchdown as did Rashard Douglas.

Easton Sellers and Andrew Babers had one interception each.

Both Haughton teams improved to 4-0 overall and 2-0 in district.

Walters connected with Tyler Trotter for a 72-yard TD on Benton’s first offensive play. Trotter also scored the Tigers’ final TD on a 21-yard reception after Webster had gotten back into the game with a couple of touchdowns.

Walters hit Pearce Russell for a 30-yard score. He completed a pass to Sawyer Simmons for a two-point conversion after the first touchdown.

Nate Sessions kicked a PAT after the final TD.

He scored the game’s first TD on a 31-yard swing pass from Jeff King. Manning set up his second TD, a 10-yard run, with a 45-yard gain.

King hit Bryson Pierce (55 yards) and Ryan Liles (12 yards) for scores. He also connected with Pierce and Liles for conversions and scored one himself.

Trey Smith got in on the scoring with a 12-yard TD run around right end.

The Tigers improved to 4-1.

Harper rushed six times for 50 yards and a touchdown. He also completed four of five passes for 74 yards and a TD.

Lane Mangum gained 42 yards on seven carries and scored a touchdown. Jaylon White rushed for 44 on five carries. Demon Blackwell had 30 on four.

Brandon Levy caught two passes for 57 yards and a touchdown. White had two catches for 17 yards and Mangum had one for 10.

Zach Schoenborn also had three tackles to go with an interception and a forced fumble.

Bryson Broome had a big game for the seventh-grade Eagles. He returned a kickoff 45 yards for a touchdown and an interception 55 yards for another one. He also had 4.5 tackles.

Ashtin Jackson also had 4.5 tackles. Jackson Nall had four, including a sack. Carter Wells had four. Greg Chitman, Will Achee and Kameron Martin had three apiece.

Wells led the Eagles on the ground with 67 yards on six carries, including a TD. Chitman had three on 20.