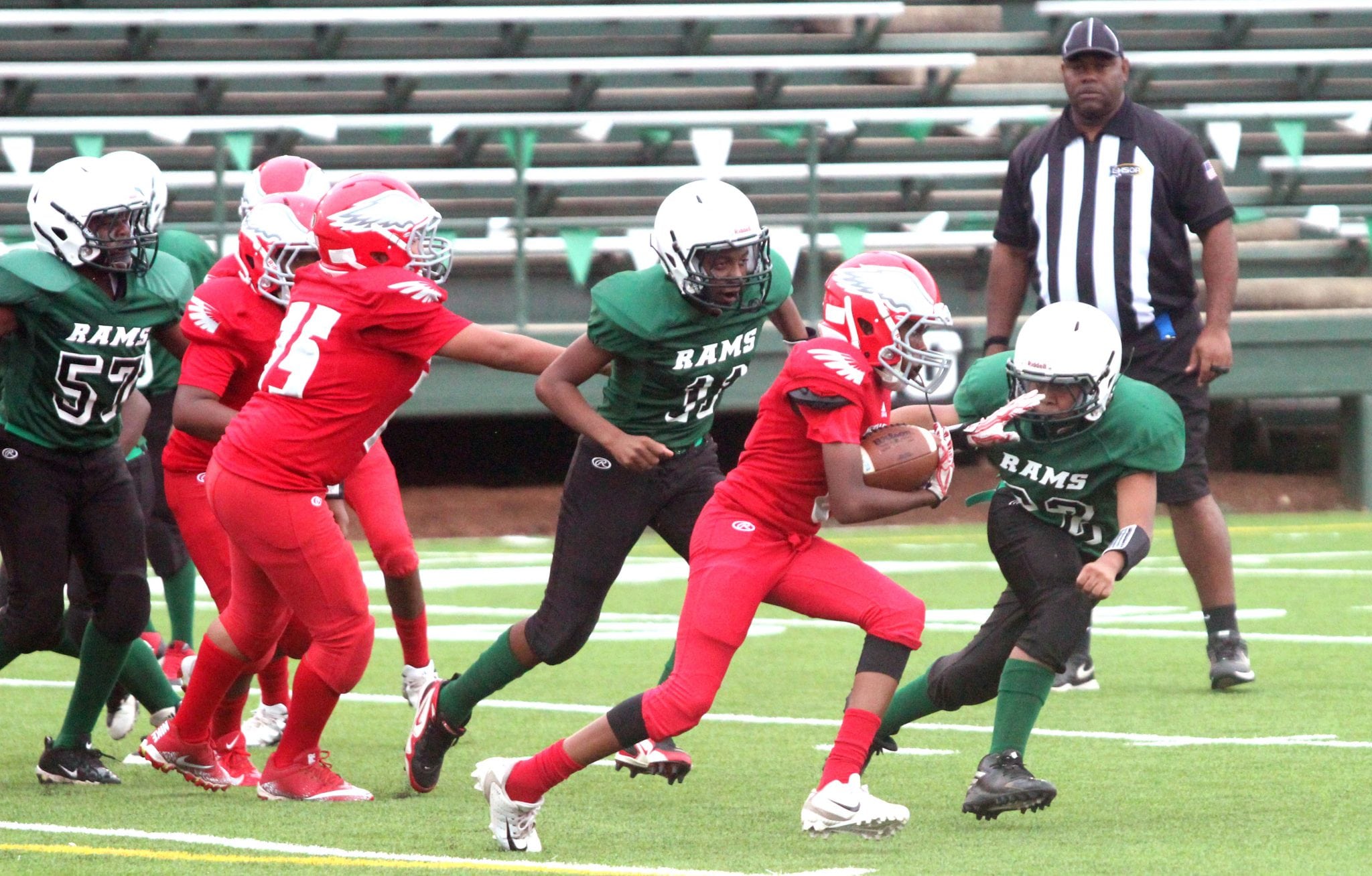 The Eagles won the eighth-grade game 27-12 and the seventh-grade game 20-6. The other district games between the Cope Cougars and Haughton Buccaneers scheduled at M.D. Ray Field at Airline Stadium were postponed because of wet grounds. Airline has a home game against Ruston Friday night and there was concern about wear and tear on the field.

White went 57 yards for his TD and finished with 71 yards rushing. Newman carried five times for 50 yards. In addition to his rushing touchdown, Harper completed two of three passes for 50 yards. Brandon Levy had both receptions.

Blackwell also made a big play on defense, returning an interception for a touchdown.

Zach Schoenborn had an interception to go with five tackles. Blackwell and Levy had four each. Newman had three. O’Myrion Jenkins broke up a pass.

Elm Grove improved to 2-0 overall and in district. Rusheon dropped to 0-2.

Carter Wells scored one rushing touchdown and one receiving for the victorious Elm Grove seventh-grade team. He gained 55 yards on 11 carries and caught two passes for 36 yards.

Michael Collier completed three of four passes for 42 yards and the TD. Ashtin Jackson returned a kickoff 45 yards for a TD.

Wells was also a force on defense. He had 3.5 tackles, a sack for a safety and a fumble recovery.

At Webster, Justin Epps rushed for 60 yards and returned an interception for a touchdown in Greenacres’ eighth-grade victory.

Nick Vascocu hit Daxton Chavez for a touchdown to give the Mustangs a 6-0 halftime lead.

Roland Wilkinson ran for one touchdown and connected with Sentavion Ball for a 44-yard TD pass in the first half for the victorious Mustangs seventh-grade team.

Zitravion Brown extended the lead with a 4-yard touchdown run in the fourth quarter.

Both Greenacres teams improved to 2-0.

“We really had to work for both of these wins,” Skinner said. “Webster’s defensive line for both grades were very talented and caused us to make adjustments all night. Our guys rallied together and made enough plays to come out on top. I can’t say enough about our defensive effort for both teams. We were able to hold their very good running backs to minimal yards. We definitely bent, but we never broke. I’m very proud of our guys.”

At North DeSoto, a big special teams play was the difference in the Tigers’ eighth-grade victory. Cyrin Huggins scooped up a punt blocked by Zach Halbert and returned it for the game’s only touchdown with just 23 seconds left to play.

Jeff King tossed two touchdown passes in Benton’s seventh-grade victory. One went to Greg Manning and the other to Aubrey Hermes. Manning scored a two-point conversion following his TD catch.

Benton’s first TD was scored by the defense. King completed a pass to Ryan Liles for the two-point conversion.

The Tigers improved to 2-0.

NOTE: The above report is based on game information and statistics provided by coaches. It will be updated if more information is received.