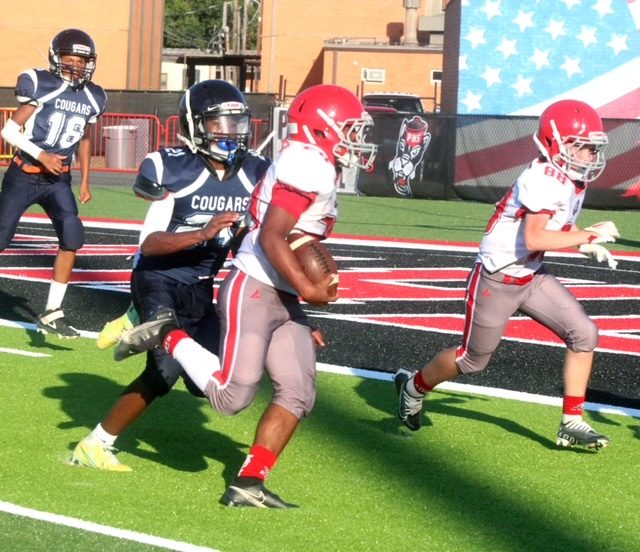 (Note: The following information was provided by coaches. If more information is received this report will be updated.)

At Preston Crownover, Jaydon Spencer passed for two touchdowns and ran for one in Elm Grove’s eighth-grade victory.

Both of Spencer’s TD passes went to Gary Burney. Rylan Plunkett led the Eagles in rushing.

Lucas Rickman had an interception. Coaches also cited the play of lineman Roderick Johnson on both sides of the ball.

Loche and Isiah Iacona led the Eagles in tackles. Defensive linemen Jaydan Thompkins and LaDeverick Butler were other standouts.

At Airline, Greenacres took the lead in the eighth-grade game on Jimarion Arthur’s touchdown run with 16 seconds left.

Haughton’s Ethan Johnson caught a touchdown pass from Taylor Weathersby and scored a rushing touchdown. Coaches cited an outstanding effort by the defense, including interceptions by Jaren Walton and Nate Carver.

Donald Marshall scored two conversions, one on a run and one on a pass from Woodard.

At Benton, Sawyer Shane scored on a pair of 59-yard runs early in the Tigers’ seventh-grade victory.

Conner Loe passed to Abram Patterson for a TD.

Colt Herndon had an interception.

College football: Perseverance on and off the field marks Walters’ NSU journey