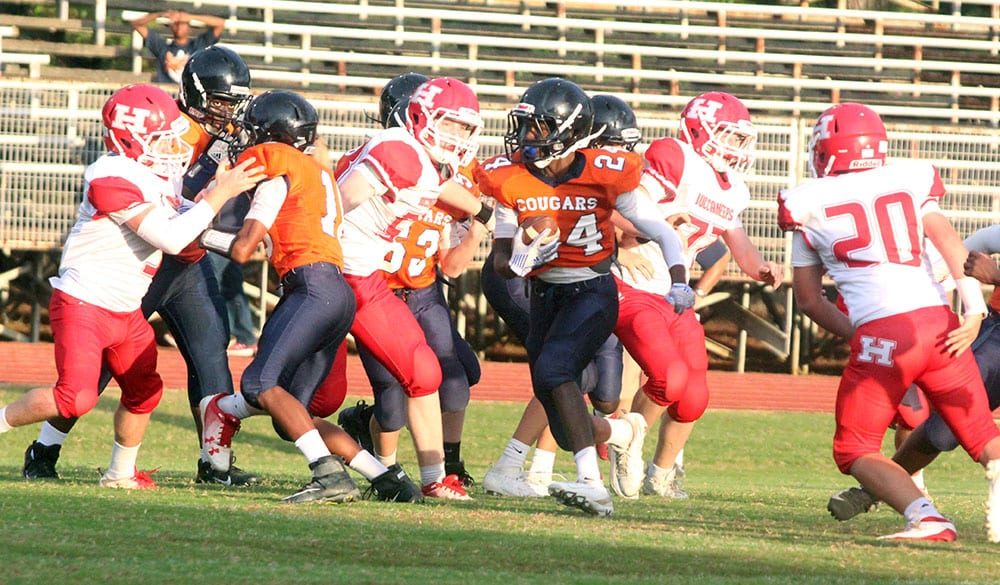 Benton and Greenacres swept their opponents in non-district games.

The Greenacres seventh-grade team improved to 3-0.

At Haughton, Cope scored first on a long run by Trey Jackson. Haughton stopped the two-point conversion attempt well short of the goalline.

The Cougars had another scoring opportunity in the first quarter but came up less than a yard short of a first down on a fourth down inside the 20.

Haughton then went on a long, multi-play drive that ate up most of the second quarter. Quarterback Brayden Stovall, who had several good runs, got the touchdown on a short keeper. Carter Ebarb kicked the extra point and the Bucs led 7-6 with about a minute to play in the half.

Stovall scored the only touchdown of the second half on a run and then tacked on the two-point conversion.

Cope dominated the first half of the seventh-grade game. The Cougars scored on the final play on a leaping catch to make it 24-0.

Gaby and Brenden Lowery we’re cited for their defensive play.

At Airline, Greenacres’ Jaxon Graham had a sack for a safety for the only points of the first half in the eighth-grade game.

Graham caught a 20-yard touchdown pass from Carter White in the second half. Michael Adler scored the conversion.

Lane Plunkett and Nehemiah Barrett each ran for a touchdown in the seventh-grade victory.

Gracie Rellin and Barrett recorded multiple sacks and tackles behind the line of scrimmage.

At Benton, Greg Manning and Ryan Liles scored two touchdowns each in the Tigers’ eighth-grade victory.

Manning’s two TDs came on the ground. He also scored a conversion.

Lannon Collum scored the Tigers’ second TD on a 3-yard run. It was set up by a fumble recovery on a kickoff return followed by a long pass from Collum to Justin Slaid.

Justin Slaid also went 48 yards on a reverse for a touchdown.

McNeil scored the final TD and added the conversion. Chris Player also scored a conversion on a pass from Collum.