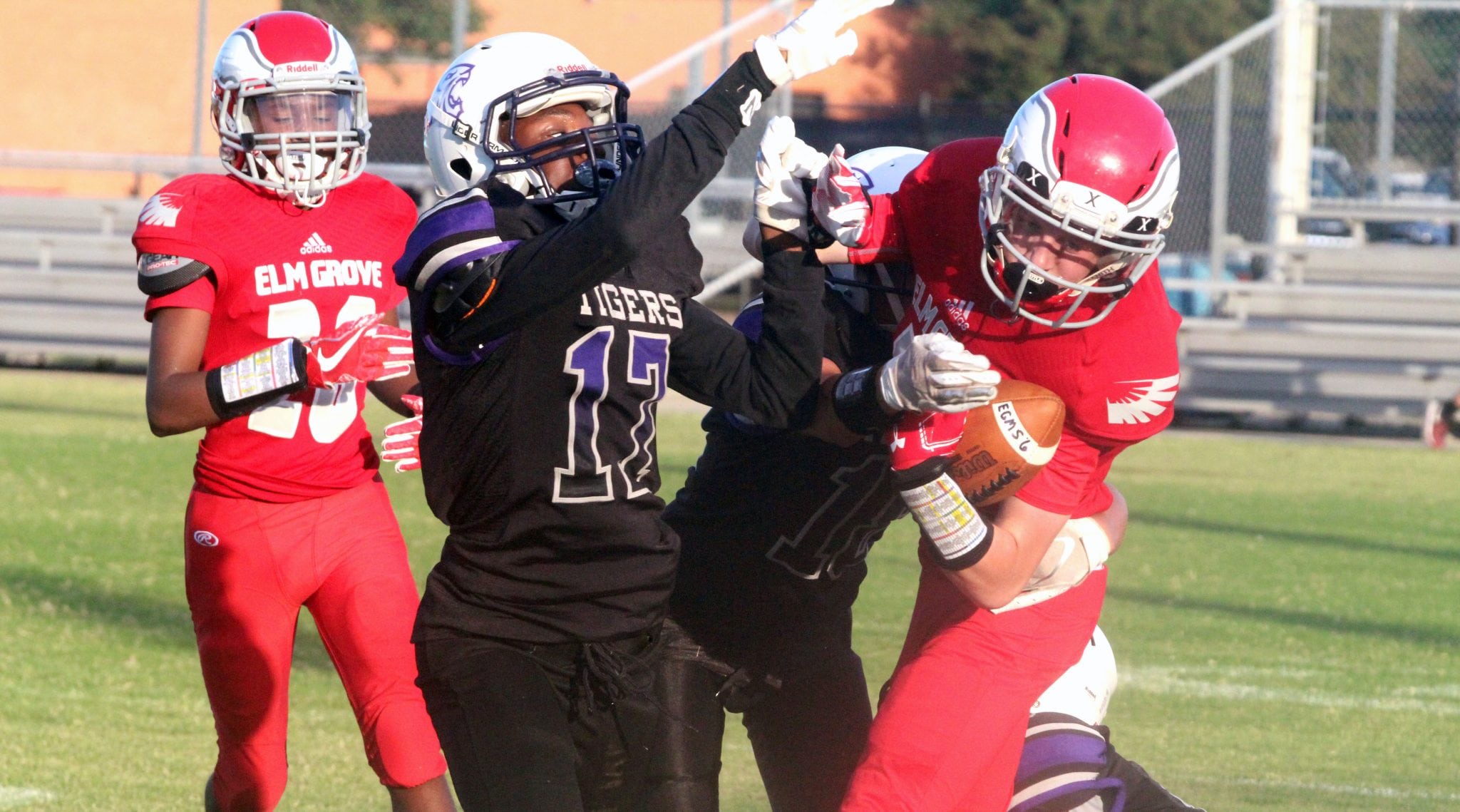 In non-district games, the Cope Cougars got past North DeSoto 30-26 at North DeSoto and the Haughton Bucs downed Webster 30-20 at Haughton.

Carter Wells raced 50 yards for an Elm Grove touchdown. He also had a nice run deep into Benton territory, but the Tigers prevented him from making it to the end zone.

In the eighth-grade game, Elm Grove pulled away in the second half after Benton cut the lead to 21-14 midway through the third quarter on a safety.

Quarterback Eli Harper had a big game for the Eagles. He completed seven of nine passes for 127 yards and two touchdowns. Harper also rushed for 80 yards on three carries, including a 45-yard TD run up the middle after Benton had cut the deficit to seven in the third quarter.

Running back Jaylan White was also impressive. He caught a 33-yard TD pass and rushed six times for 85 yards and three TDs. His touchdown runs covered 5, 17 and 46 yards. The latter two came in the second half and helped the Eagles pull away.

Demond Blackwell caught a 12-yard pass for the first TD of the game and rushed 10 times for 48 yards. Brandon Levy had two receptions for 52 yards. Kris Mesloh caught one pass for 18 yards. Lane Mangum carried two times for 5 yards.

Elm Grove coach Patrick Hanish praised his entire defense for its effort. Trenton Lape and Zach Schoenborn had interceptions. Levy broke up a pass on a two-point conversion attempt.

Elijah Meza was in on 5.5 tackles. Newman and Schoenborn were in on four each.

Benton quarterback Grey Walters performed well. He tossed four touchdown passes — two to Tyler Trotter, one to Pearce Russell and one to Kenner Lauterbach — and ran for a conversion. Russell had multiple receptions.

At Airline, Justin Epps ran for 120 yards with a touchdown and a two-point conversion to lead the Greenacres eighth-grade squad to the victory.

Zion Smith ran for 50 yards and scored a two-point conversion. Quarterback Nick Vascocu scrambled for 40 yards and connected with Jeremiah Davis for a 42-yard touchdown pass.

“Tyler Bullard, Preston Cooper and Justin Epps were all over the place for us defensively,” coach Chris Skinner said. “We gave up two big plays in the passing game, but besides that played pretty sound defense. We were able to mix it up just enough to stay effective against a very good Rusheon defense. Our guys persevered and played with a lot of heart tonight, but so did Rusheon. It was the definition of team victory.”

Le’Brandon Davis ran for over 100 yards and scored two TDs for the victorious Mustangs seventh-grade team.

Epps and Zitravion Brown both rushed for 80 yards.

“Aydin Ashworth and Michael Adler led the defense with close to ten tackles each,” Skinner said. “LaKenneth Scott disrupted Rusheon’s offensive line all night. We played sloppy defense in the first half, but settled in after halftime. Our running backs carried us tonight. Rusheon’s defensive front played very tough, but our backs were able to break tackles and keep drives alive.”

At North DeSoto, Cope rolled up 309 total yards in the seventh-grade victory.

Trevon Jackson carried the ball 13 times and scored five touchdowns and a conversion. His longest run was for a 63-yard TD. Markell Hampton had seven carries, including a 12-yard run, and a conversion. Sincere Walker and Brandon Sanders combined for three carries.

Champ Endris and Trevon Jackson were defensive standouts. P.J. Hughes, who recovered an onside kick and had two tackles, was named the special teams player of the game.

NOTE: The above report is based on information provided by coaches. It will be updated if more is received.