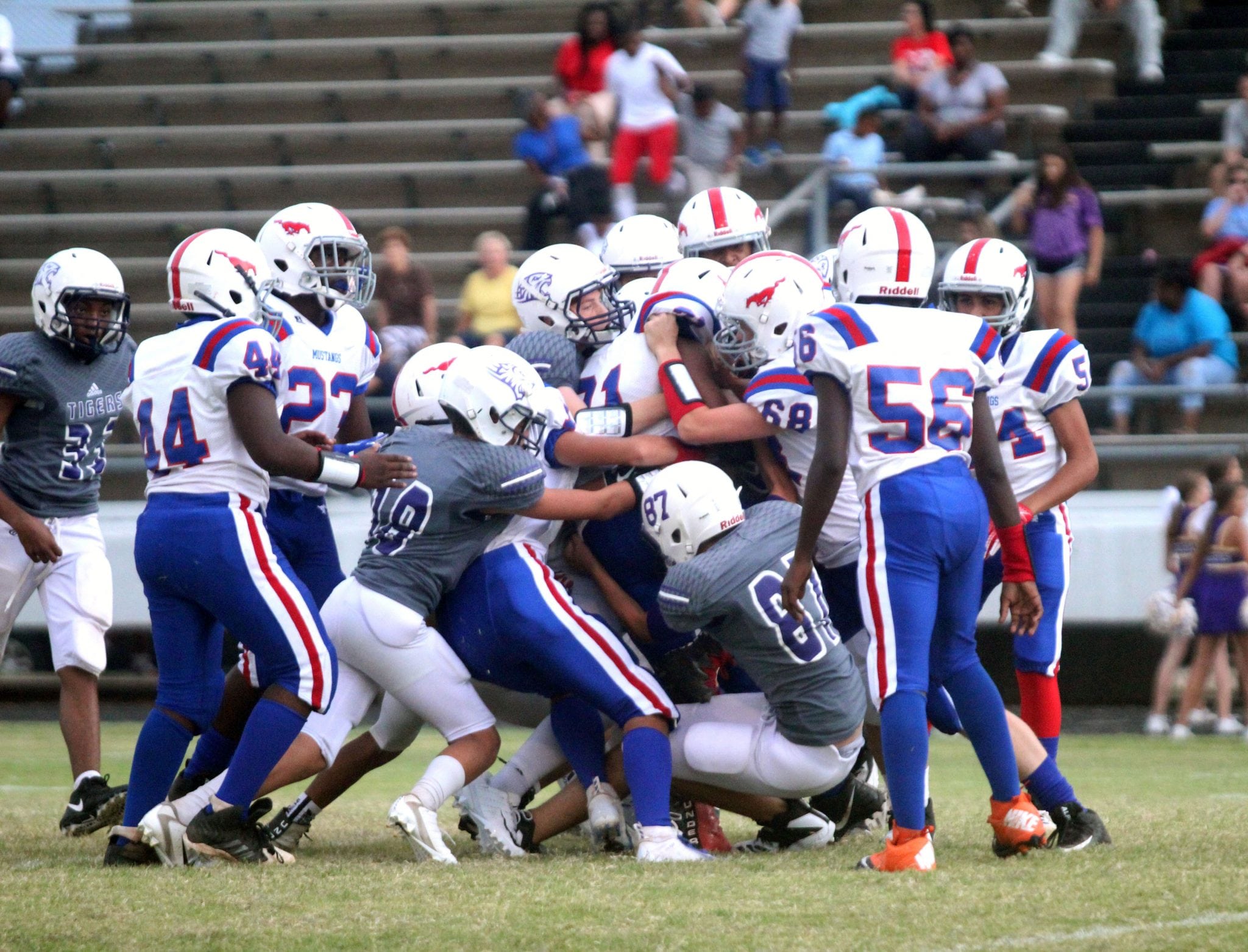 Seventh-grade games start at 5 p.m. and are followed by the eighth-games.

The seventh- and eighth-grade jamborees were held last week.

There were three close contests in the eighth-grade jamboree at Preston Crownover. Cope and Elm Grove played to a 0-0 tie in the first 20-minute “game.” Benton edged Greenacres 14-12 in the second. Haughton downed Rusheon 16-8 in the nightcap.

In the only seventh-grade “game” reported to The Press-Tribune, Cope defeated Elm Grove 8-0.

At Preston Crownover, the Cougars and Eagles both made some good plays on offense, but defense held sway.

Elm Grove quarterback Eli Harper had a nice scramble for good yardage early in the game. But the Cope defense came up with some big plays to keep the Eagles out of the end zone.

The Eagles defense forced a fumble in the first half and recovered it.

Cope’s Kameron Allen had the first hit on a sack.

Elm Grove’s Barrett Newman took a swing pass from Zach Schoenborn on the game’s final play and sprinted down the right side of the field. It looked like he might score, but the Cougars were able to make the tackle and preserve the tie.

The Tigers overcame a holding penalty and a sack to score their second TD thanks to a nice run by Sawyer Simmons. Andy Lim scored the decisive conversion.

Dennis Means and Justin Epps both ran the ball well for Greenacres. Means the Mustangs’ first TD on a short run. Epps broke loose for a long TD run in the second half.

In the final game, Haughton’s Jesse Normandin scored a late rushing touchdown to break an 8-8 tie. Colin Rains scored the conversion. John Ecot set up the touchdown with a long run.

Rusheon quarterback Davarious Dunigan had a couple of long completions. He also made an interception from his defensive back position.

JaDarrious Johnson scored the Rams’ touchdown on a short run late in the game. He swept left and was almost tackled before cutting back across the field and racing to the end zone.

Rusheon tied the game on a two-point conversion pass.

Trey Jackson scored on a 25-yard run in Cope’s seventh-grade win. Markell Hampton scored the conversion. Hampton also had a 66-yard TD run called back because of a penalty.

NOTE: The above report is based on information provided by coaches and the observations of the reporter. Report scores and game details to rhedges@bossierpress.com. Photos may also be submitted.