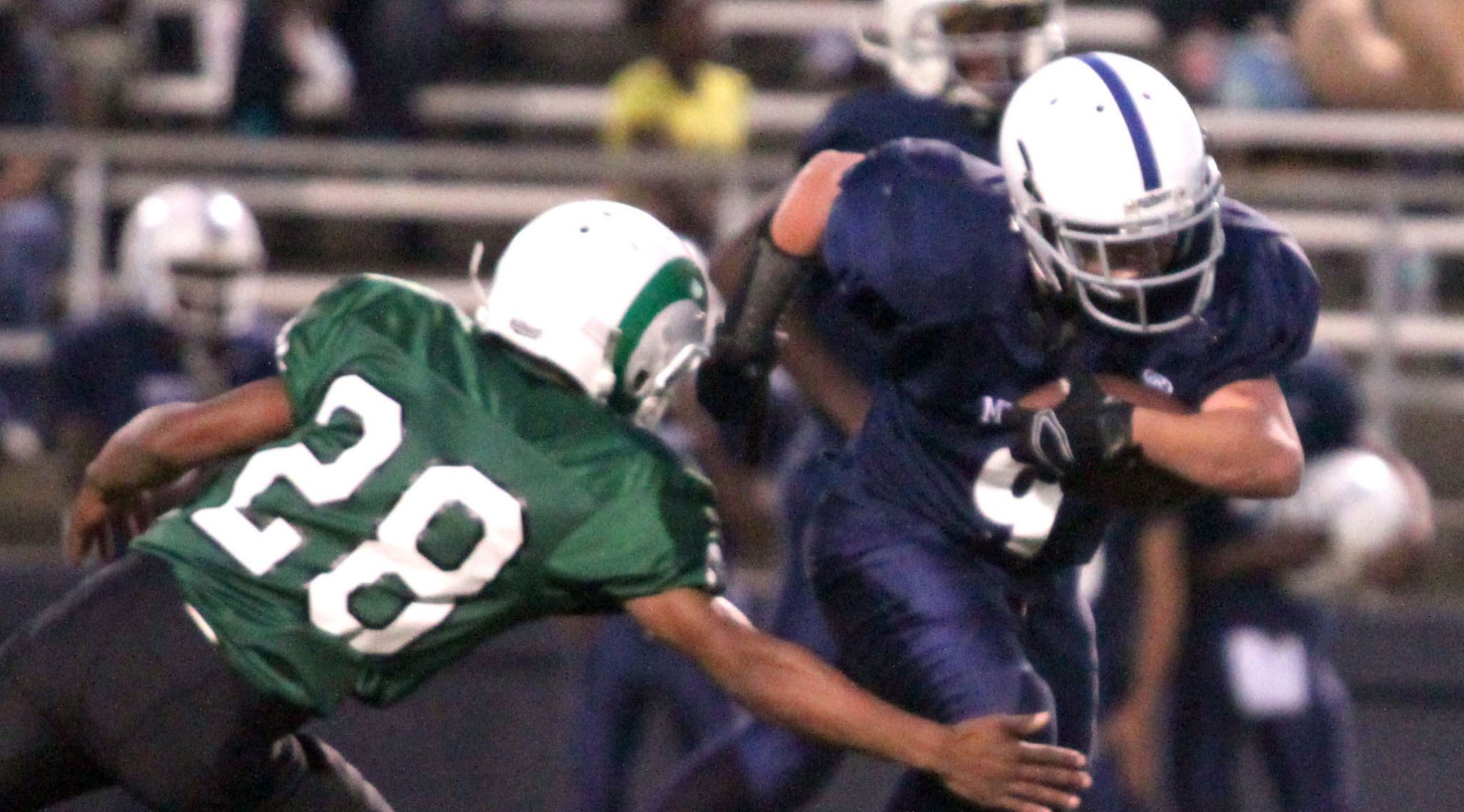 Elsewhere, the Elm Grove Eagles and Benton Tigers split games. The Tigers won the seventh-grade game 20-0 and the Eagles won the eighth-grade game 36-12.

The Rusheon Rams and Greenacres Mustangs also split. The Mustangs took the seventh-grade game 38-20 and the Rams won the eighth-grade game 24-16.

The Haughton Bucs and the Caddo Middle Magnet Mustangs split games, too. The Bucs won the seventh-grade 24-16 and the Mustangs won the eighth-grade game 19-0.

At North DeSoto, Jamal Johnson rushed for 161 yards on nine carries and scored touchdowns on runs of 66, 60 and 35 yards to lead the seventh-grade Cougars.

On the defensive side, Derrick Ford, Johnson and Hunter Rice forced four fumbles among them. One went out of bounds on fourth down. Brandon Marshall forced two fumbles and Ford recovered two. Rice returned an interception 19 yards.

Adrian Brooks rushed for 108 yards on 19 carries and scored two TDs to lead the Cope eighth-grade team. Ian Stanfield and Daniel Turner combined for 57 yards on the ground.

The Cougars defense had two big defensive stands in the fourth quarter to help preserve the win. According to coaches, defensive standouts were Noah Sheets, Antavios Freeman, Jordan Ebling and Noah Franklin.

Franklin and Freeman had one sack each. Sheets returned an interception 16 yards.
The Cougars won despite having three TDs erased because of penalties.

At Benton, Amani Larry was in on three touchdowns to help the Eagles eighth-grade team win.
One of his biggest plays was a 60-yard kickoff return for a touchdown as time expired in the first half after Benton tied the game at 6. Larry then hit Jeffrey Melton with the two-point conversion pass.

He also hooked up with Anthony Papasan on a 50-yard TD pass and ran 5 yards for a score. Larry scored the conversion after his rushing TD. Elm Grove coach Mark Tabor said Papasan’s blocking and receiving were keys to the victory.

Alec Crain opened the scoring for the Eagles with a 3-yard run on their first drive. Tabor said Crain’s hard running throughout the game contributed to the victory.

Dakota Dean and Carson Sanders were standouts on the offensive line, Tabor said. He also said Reese came up with some big hits on defense and that Christian Galvan played well up front.
Zeke McKnight chased down a Benton receiver and forced a fumble after a long pass and Caleb Shearin recovered at the Elm Grove 10.

Defensively, John Smith, Josh Smith and Julian Hall were standouts on the line along with Trey Winkler, Stowell said.

CJ Jones caused two fumbles and had an interception.

At Airline, Jacoby Decker scored four touchdowns on runs of 30, 50, 40 and 5 yards to lead the Rusheon eighth-grade team to the victory.

Tearance Washington, Shucurio Thomas, Brenden Moseley and Decker all had sacks for the Rams. Montrez Henderson and Ja’Nyron Rogers had fumble recoveries.

Trey Taylor, Jonathan LaCour and Devonta Davis scored touchdowns for the Greenacres eighth-graders.
Taylor and Davis scored on runs of 8 and 5 yards, respectively. LaCour caught a 45-yard pass from Caden Jones, who broke his collarbone later in the game.

Ja’Keldrick Thomas scored two TDs for the Rusheon seventh-graders on runs of 40 and 50 yards. He also scored a conversion. Decamerion Richardson had a 50-yard TD run.

Walker said Ryker St. John and Garrett Timm played well for the eighth-grade Bucs and that the entire team gave a worthy effort.