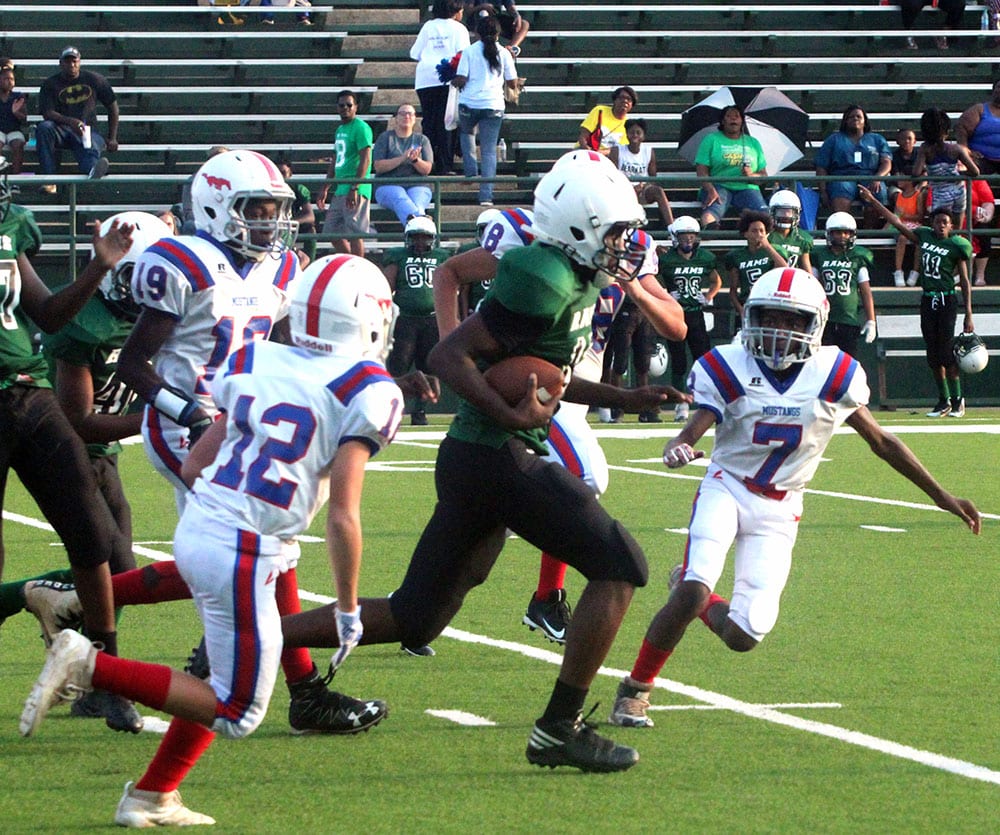 Benton won both the seventh- and eighth-grade games by 28-0 at Tiger Stadium. Greenacres won the seventh-grade game 34-0, and Rusheon won the eighth 14-8 at Bossier’s Memorial Stadium.

At Bossier, the only score of the first half in the eighth-grade game came on a 65-yard pass from Greenacres’ Ladarius Epps to Jaxon Graham. V’lon Morris scored the conversion.

The Mustangs had a chance to increase the lead right before halftime but the Rams intercepted a pass at the goalline.

Rusheon quarterback Keyshun Johnson made things tough for the Greenacres defense with his scrambling. He nearly led the Rams to a score on their opening drive. But the Mustangs finally were able to contain him with some tackles behind the line and forced a turnover on downs.

The Rams rallied in the second half with some big plays. Johnson completed touchdown passes to Kendall Davis and Bryson Broom. Johnson scored the conversion.

Nehemiah Barrett scored touchdowns on runs of 5 and 25 yards for the victorious seventh-grade Mustangs.

Tristan Verdin returned an interception 25 yards for a TD and scored a conversion.

Michael McCoy made a tackle in the end zone for a safety. Gracie Rellin recovered a fumble.

The games were the district openers for both teams.

At Airline, both Cope teams improved to 2-0.

Jackson and Boudreaux also contributed on offense. Jackson rushed for 59 yards on seven carries. He scored on a 15-yard run and also ran in a conversion. Boudreaux had six carries for 31 yards.

Jackson, Boudreaux, Calhoun, Champ Endris and Brandon Sanders were named the defensive players of the game by coaches.

Lawson Moock had a sack, forced a fumble and recovered a fumble. Chase Tolbert was also a standout on defense.

The Bucs evened their record at 1-1.

Davontay Moss ran 57 yards for a TD to help the Bucs win the seventh-grade game. Christian Turner hit Judson Adkison for the conversion.

Turner also connected with Marlon Montgomery for a touchdown.

Tristan Gaby intercepted a pass and Desmond Barnes recovered a fumble. Harvey Ingram had several tackles behind the line.

At Benton, both Benton squads improved to 1-1 in district and overall with the wins.

Bo Sessions made big plays on defense and special teams in the Tigers’ eighth-grade win.

He forced a fumble while making a sack and returned it 45 yards for a touchdown. He also blocked a punt to set up a TD.

Greg Manning scored on an 8-yard run, a 10-yard pass from Jeff King and a 4-yard run. He also ran in a conversion.

Cole Smith’s fumble recovery on a kickoff return set up a score. King hit Bryson Pierce for 45 yards to the 4 and Manning scored his final TD on the next play.

Lannon Collum ran for one touchdown and passed for another in the seventh-grade victory.

Collum swept around the left side from 8 yards out for the Tigers’ first score. He then passed to Justin Slaid for the conversion.

Collum connected with Chris Player for a 15-yard TD.

In between those scores, Jayden McNeil ran 12 yards for a touchdown. McNeil also scored the final TD on a 4-yard run and added the conversion.

Slaid, Carter Martin, Garrett Armer and Conner Jeter were cited as defensive standouts in the shutout.