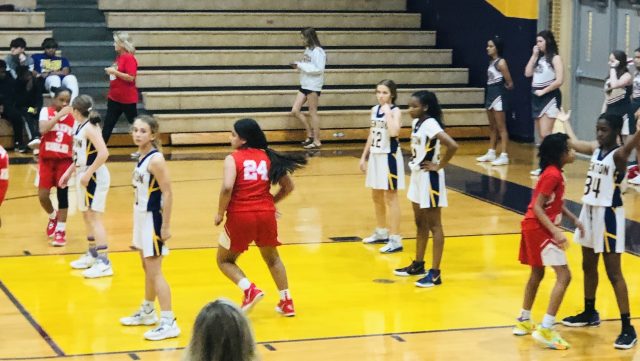 The Elm Grove Lady Eagles clinched a share of the Bossier Parish middle school eighth-grade district championship with a hard-fought 40-28 victory over the Benton Lady Tigers Thursday at Benton.

Elm Grove improved to 8-0. The Lady Eagles have a two-game lead over the Lady Tigers (6-2) with two to play. Cope, which did not play Thursday, is 5-2.

In the other eighth-grade game, Haughton defeated Greenacres 35-24 at Haughton.

The Benton seventh-grade team improved to 8-0 with a victory over Elm Grove. The Lady Tigers lead Cope, which defeated Rusheon at Rusheon, by one game with two to play. The Lady Cougars host the Lady Tigers Monday.

In the other seventh-grade game, Haughton defeated Greenacres 23-10.

At Haughton, Skylar Branch tallied 11 points to lead the Lady Bucs eighth-grade team to the victory.