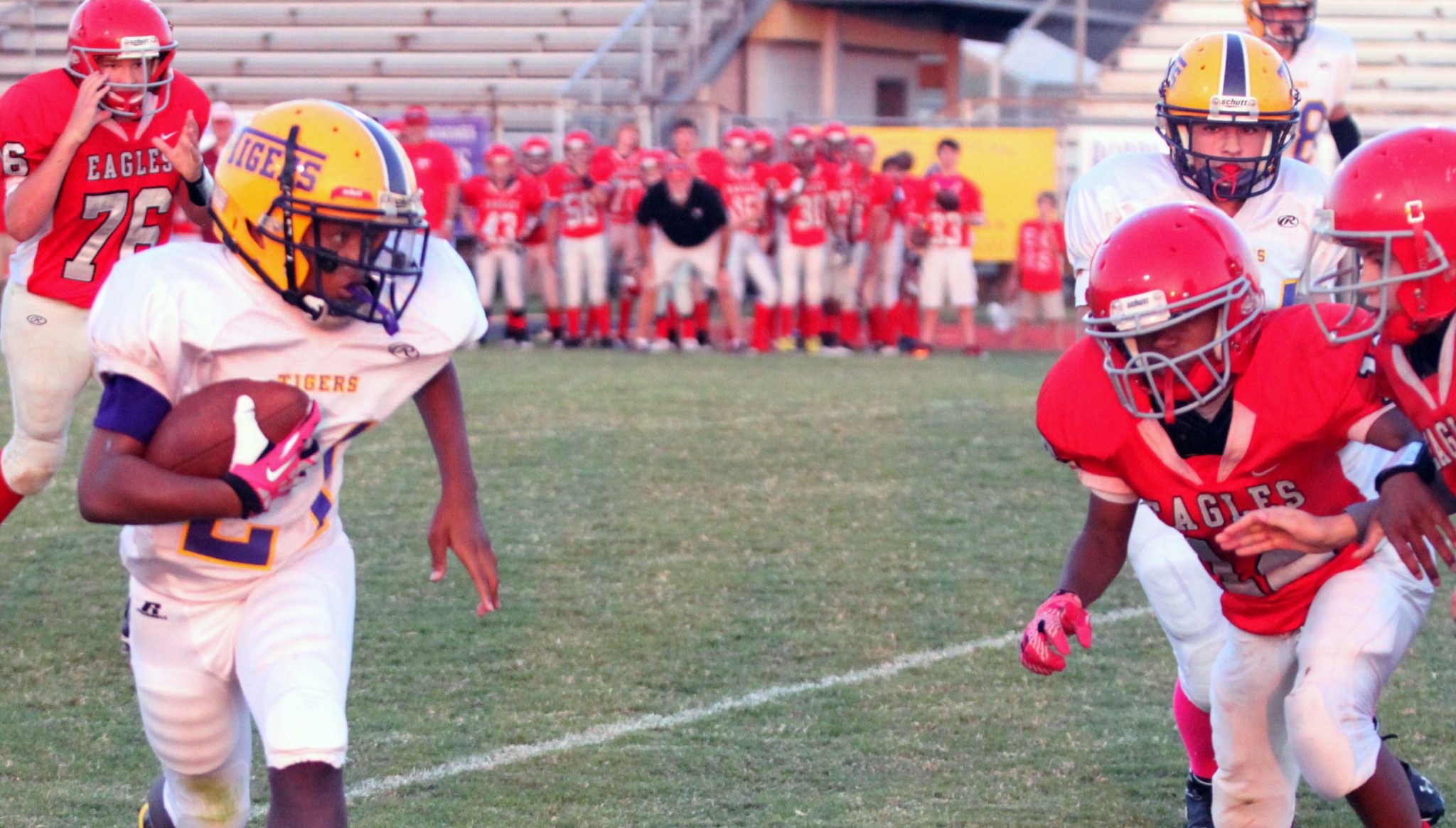 The Elm Grove Eagles and Greenacres Mustangs will meet for the Bossier Parish middle school eighth-grade district title next Tuesday at Airline Stadium.

The Eagles and Mustangs both improved to 4-0 in district play with victories Tuesday. Elm Grove defeated Benton 30-0 at Benton, and Greenacres downed Haughton 30-14 at Airline Stadium.

The other eighth-grade game this week between Rusheon and Cope scheduled for Bossier High’s Memorial Stadium was moved to Thursday.

In seventh-grade action Tuesday, Haughton improved to 4-0 in district play with a 48-20 victory over Greenacres, and Benton rallied late for a 22-16 win over Elm Grove.

If Cope defeats Rusheon Thursday, Haughton and Cope will play for the seventh-grade title next Tuesday at Haughton.

At Benton Tuesday, Amani Larry had a hand in three touchdowns to lead the Eagles to the eighth-grade win.

He scored on a 1-yard sneak, returned a kickoff 65 yards for a TD and passed 60 yards to Nick Cannon for another. Larry also passed to Anthony Papason for a two-point conversion.

Elm Grove coach Mark Tabor said Caleb Shearin, Alec Crain and Papason were among the defensive standouts. He also cited the play of Miguel Espino and Deyrion Eloph on the offensive line.

This group of Elm Grove eighth-graders is 17-0 overall over the past two seasons.

Benton had its chances but couldn’t put the ball in the end zone. The Tigers looked like they were going to tie the game in the second quarter but the Eagles stopped the drive with an interception at the 1.

Brad Fream made some nice throws. Ethan Yarbrough had a catch that put Benton in scoring position.

But Benton drove down the field and scored on a swing pass from Bryson Connell to Bobby Smith to get the win.

Elm Grove’s other TD came on a pass from Drake Fontenot to James Corley. Dooley scored the conversion.

Dooley rushed for 70 yards on 10 carries and Peyton Lewis had 30 on six. Tabor said Adam Johnson did a good job of blocking up front. He said Jacobs and Tobias Spoon were among the defensive standouts.

At Airline, Greenacres’ Trey Taylor continued his outstanding season, scoring on runs of 3 and 7 yards and returning an interception 65 yards for a touchdown in the Eagles’ eighth-grade victory. Hunter Clemens caught two conversion passes from Kourtnee Samuels.

Cade Nelson also scored a TD for the Mustangs. Jonathan Lacour had an interception.

CJ McWilliams completed nine passes, including two for touchdowns. He also had a hand in four conversions.

Sweeney and Kilian Malena led the defense, Walker said. Malena had an interception.

Note: The above report was compiled from information received from coaches. It includes all reports received by 2 p.m. Wednesday, Oct. 22.