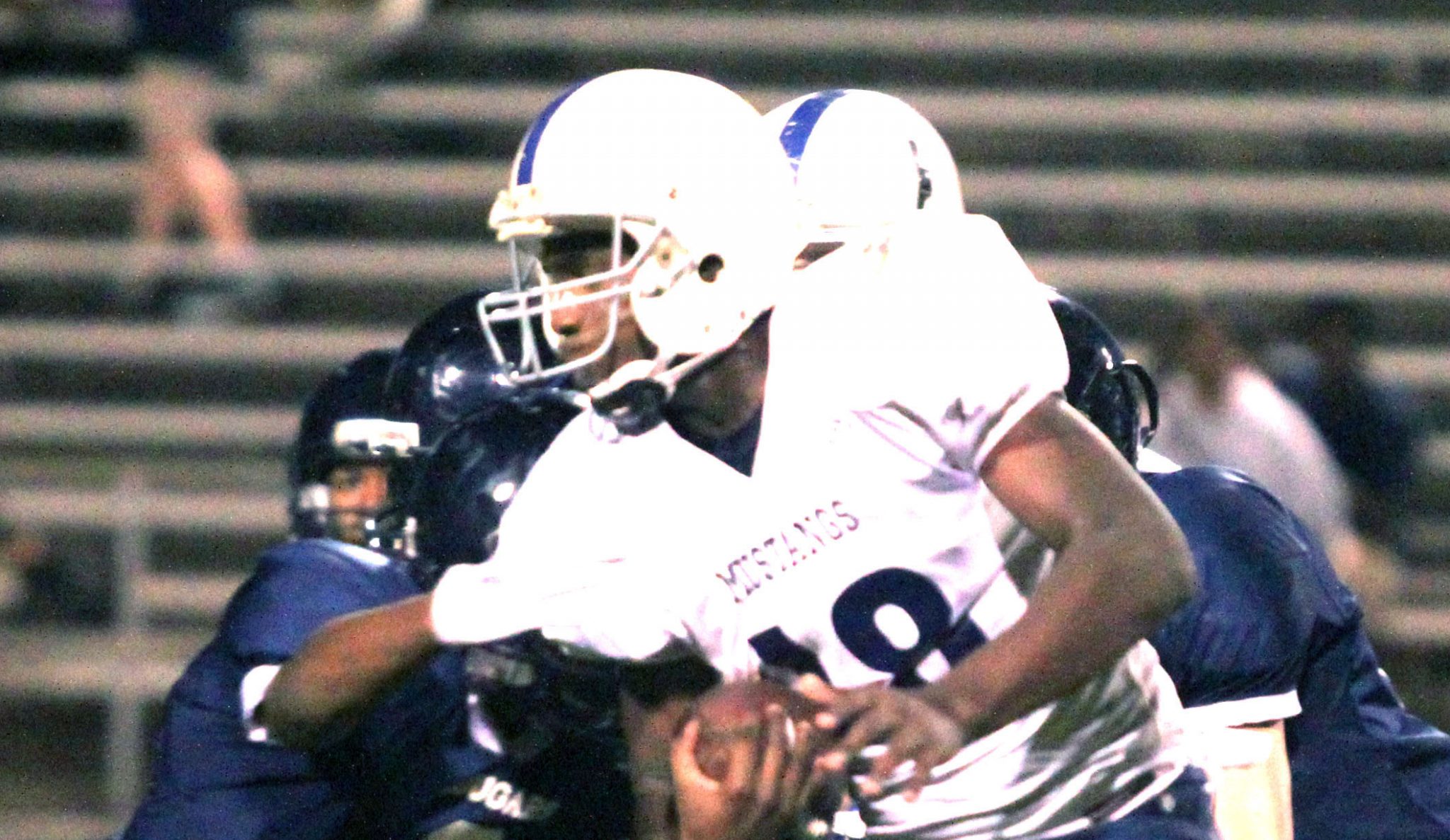 The Mustangs downed the Cope Cougars 26-14 at Airline Stadium. The Eagles got past the Rusheon Rams 20-16 at Preston Crownover Stadium.

Haughton and Cope both remained undefeated in the seventh-grade district with victories. The Bucs downed Benton 22-0 and the Cougars dropped Greenacres 30-6.

Trey Taylor scored all four touchdowns for the Mustangs. Greenacres ate up the entire first quarter on their first touchdown drive, capped by a short Taylor run. The try for two failed and the Mustangs led 6-0.

The Cougars answered with a touchdown drive of their own with Adrian Brooks getting the score. He also scored the conversion and the Cougars led 8-6 at the half.

The Mustangs regained the lead on Taylor’s 20-yard TD run with 42 seconds left in the third quarter. The try for two failed, leaving Greenacres on top 12-8.

Jaylan Richardson set up the TD with a fourth-down stop.

Brooks, who has been outstanding all season, raced 50 yards for a touchdown with 6:52 left in the game to put Cope back on top. The two-point conversion attempt failed and Cope led 14-12.

Taylor put Greenacres ahead to stay with a 60-yard run with 5:13 left. Kourtnee Samuels ran in the conversion. After the Mustangs recovered a fumble, Taylor scored from six yards out on fourth down with 1:37 left.

Cope has been in all three of its district games late in the fourth quarter.

At Preston Crownover Stadium, the Elm Grove-Rusheon game went down to the wire.

Elm Grove quarterback Amani Larry hooked up with Anthony Papason for a 40-yard touchdown with 10 seconds left in the game.

That came after Rusheon had taken a 16-14 lead with 53 seconds left on Jacoby Decker’s 35-yard touchdown reception and his conversion run.

Zeke McKnight scored touchdowns for Elm Grove in the first half on a 60-yard kickoff return and a 1-yard run. Alec Crain scored a conversion.

Decker caught a 40-yard touchdown pass in the first half and scored the conversion.

Rusheon coach Thomas Chester said Joe Robinson, Shemar Thorpe and Daniel Moore were among the defensive standouts for the Rams.

At Haughton, quarterback Brad Fream ran for a 3-yard touchdown and passed 48 yards to Bubba Osby for another in the Tigers’ victory. Osby had a big game, scoring four TDs.

Trenton Seets scored on a 12-yard run for Haughton and followed that with a conversion run. Coach Darin Walker said Garrett Timm played well on defense.

In the seventh-grade game at Preston Crownover, Samorii Dooley scored on runs of 10 and 60 yards to lead Elm Grove.

Drake Fontenot hit Gnoble Peterson with a 10-yard TD pass. The duo also hooked up on a conversion.

Peyton Lewis also scored a conversion for the Eagles.

Kedrick Henderson scored on a 5-yard run for Rusheon. James Davis scopped up a fumble caused by Kevin Pouncy and scored. Kedrick Boone passed to Andrick Robinson for a coversion. Nicholas Buchanan had three sacks.

At Airline, Cope scored a late touchdown in the first half and then added three more in the second to pull away. Lafrank Hamilton scored Greenacres’ lone touchdown.

At Haughton, Keyshawn Davis scored on runs of 11, 52 and 2 yards to lead Haughton. CJ McWilliams passed to Tristan Sweeney and Trenton Contario for conversions.

Contario had tw interceptions and Sweeney had one.

Note: The above report was compiled from reports from coaches or converage by The Press-Tribune. It includes all reports received by 10:30 p.m. Wednesday, Oct. 15.