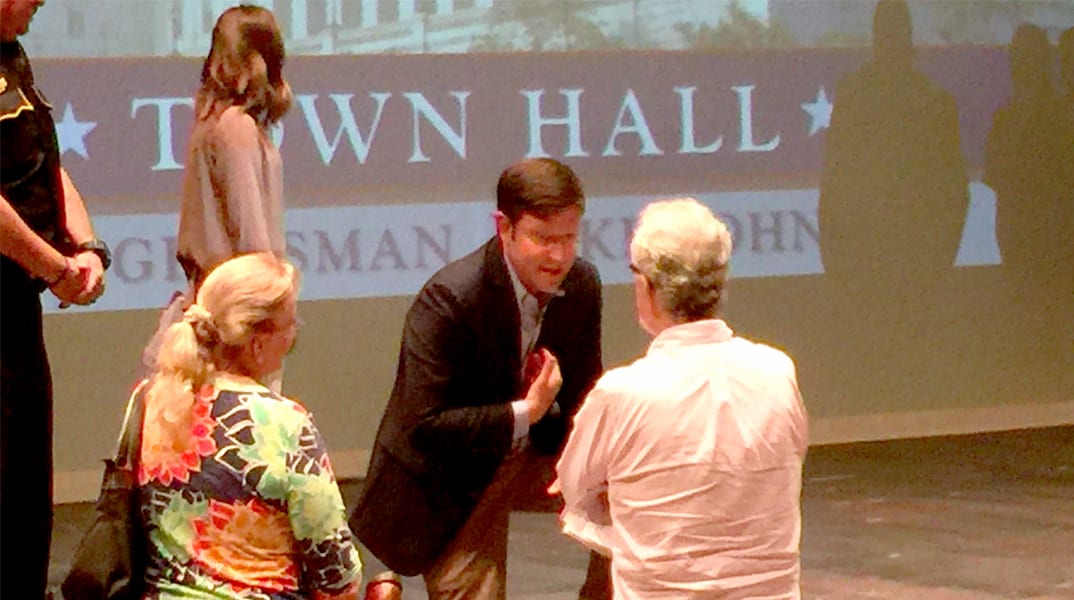 Northwest Louisiana’s representative in the U.S. House heard from a passionate, outspoken and worried district during a Monday afternoon townhall in Bossier City.

Mike Johnson (LA-4th Dist.) was both applauded and booed on various occasions for his remarks regarding everything from health care to President Donald Trump’s tax returns during a nearly 90-minute town hall meeting at Bossier Parish Community College.

He said the AHCA is meant to stabilize the insurance market, increase health care coverage options, and stabilize premiums for pre-existing conditions. He said it is based on a model from Maine as it is the “only proven model that works.”

His presentation noted that anyone who receives coverage through an employer, receives medicare, or veteran assistance would not be affected. He said the issue is the medicaid expansion that occurred under the Affordable Care Act, or “Obamacare.”

He said if AHCA is passed, many of the medicaid who were enrolled under the ACA would be grandfathered in and there would be no direct change on medicaid through 2020. Then changes would kick in, such as the federal government providing matching funds for states to cover non-elderly adults with low income.

“We want everyone to have medical coverage. But should it be a federal obligation or have it handled by the states? This would phase out medicaid expansion but not let anyone fall through the cracks,” Johnson said.

He admitted that the new legislation would “put a burden on Louisiana,” before adding that it was a better option as, “Our insurance is very different than market in Colorado, New Mexico or Wyoming. We need flexibility, one-size-fits-all doesn’t work well.”

When someone asked if he is on Obamacare, he replied he is and that his “costs have gone up, too” noting he doesn’t get a subsidy. He was also quick to add that Congress did not exempt itself from the AHCA.

Johnson then began addressing questions that were submitted ahead of the town hall. The crowd often shouted questions or opinions at Johnson regarding his statements.

When one attendee cried out that they wanted to share their opinions, Johnson explained he was using this format because “there are about 300 people in this room and it would turn into a shouting match.”