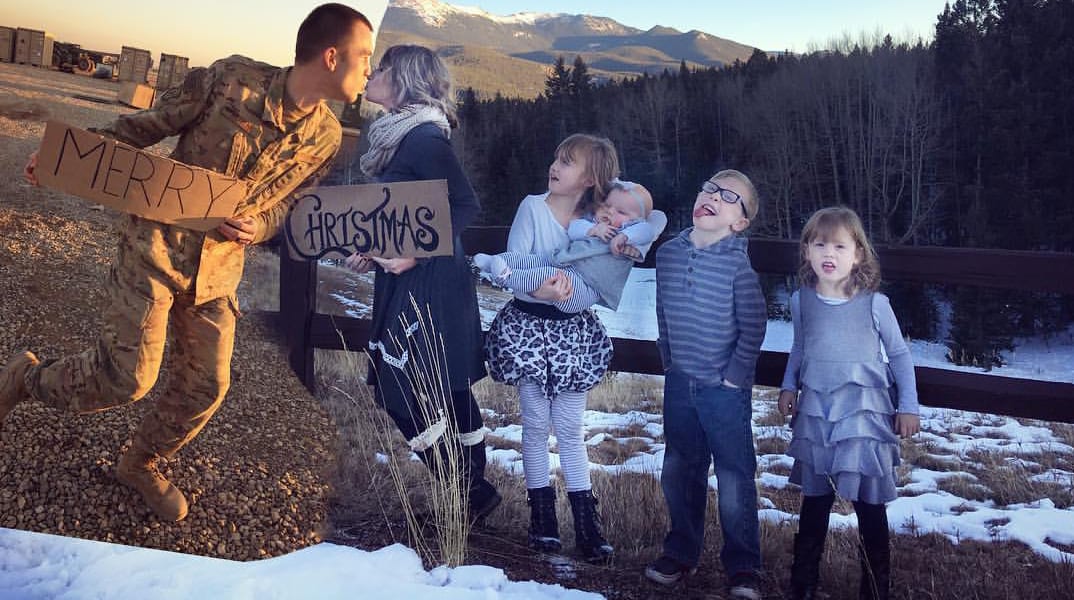 It’s easily the best Christmas photo of the year.

Haughton native Ashley Sistrunk’s creatively pieced together family photo has become a viral sensation. It’s not something she ever thought would happen, but she’s hoping it will give others a look at what it’s really like for military families with loved ones overseas during the holidays.

Brandon and Ashley Sistrunk met in youth group at a Haughton church.  They married and started a family when they made the decision to become a military family.

For the last 10 years, Brandon has served in the Air Force and has been deployed four times, missing the birth of three of his four children and the holidays. He is currently deployed in Iraq while Ashley and their kids live in Colorado Springs, CO.

This all started when Ashley saw her friends and family posting their own Christmas photos on social media. She decided to make their Christmas card unique, getting all four kids (Riley, Landon, Macy, Nora) and Brandon in one picture.

“Of course, it makes me sad that my husband is gone,” she said. “I would love to have him here for a Christmas photo. I was feeling sorry for myself and thought surely there was some way to incorporate him.”

She turned to Pinterest and found several ideas she liked. Then, she filled Brandon in on the idea.

Ashley asked Brandon to hold up a sign from his base in Iraq while she held up another sign on their end in Colorado to complete the words “Merry Christmas.” Ashley’s mom took a photo of her and the four kids in Colorado, and a military friend of Brandon’s took a picture of him in Iraq.

“We did one that was more conservative where we are just standing side by side , but that just didn’t fit our personalities,” Ashley said. “I wanted to do a more quirky one to show who we really are.”

The results of editing the two photos together have become an Internet sensation, attracting the attention of Good Morning America, the Today Show, Live with Kelly, Inside Edition and many news stations around the country. Ashley said she definitely did not expect this kind of attention and never w.

“I liked it and I knew my family and close friends would like it,” she said. “Then out of no where the local news station asked to share it. They had so much positive feedback from it that they asked to do an interview. And it hasn’t stopped yet.”

Their Christmas photo has been shared countless times on social media. Then family and friends received their card in the mail. Ashley said, “people started getting them the day after it was on the news and they said, “oh my gosh we got THE card!”

“We’ve been married for 10 years and this is actually the first Christmas card we’ve ever made,” Ashley said. “It’s going to be hard to beat this Christmas card. I may not make anymore.”

Ashley says the hardest part about having her husband gone is seeing how much the kids miss him. The Sistrunk kids are really hoping their daddy will be home in time for Christmas.

“Time is limited and it would truly take a miracle,” Ashley said. “My kids are praying for daddy to be home by Christmas.”

Brandon is supposed to return from deployment in January.