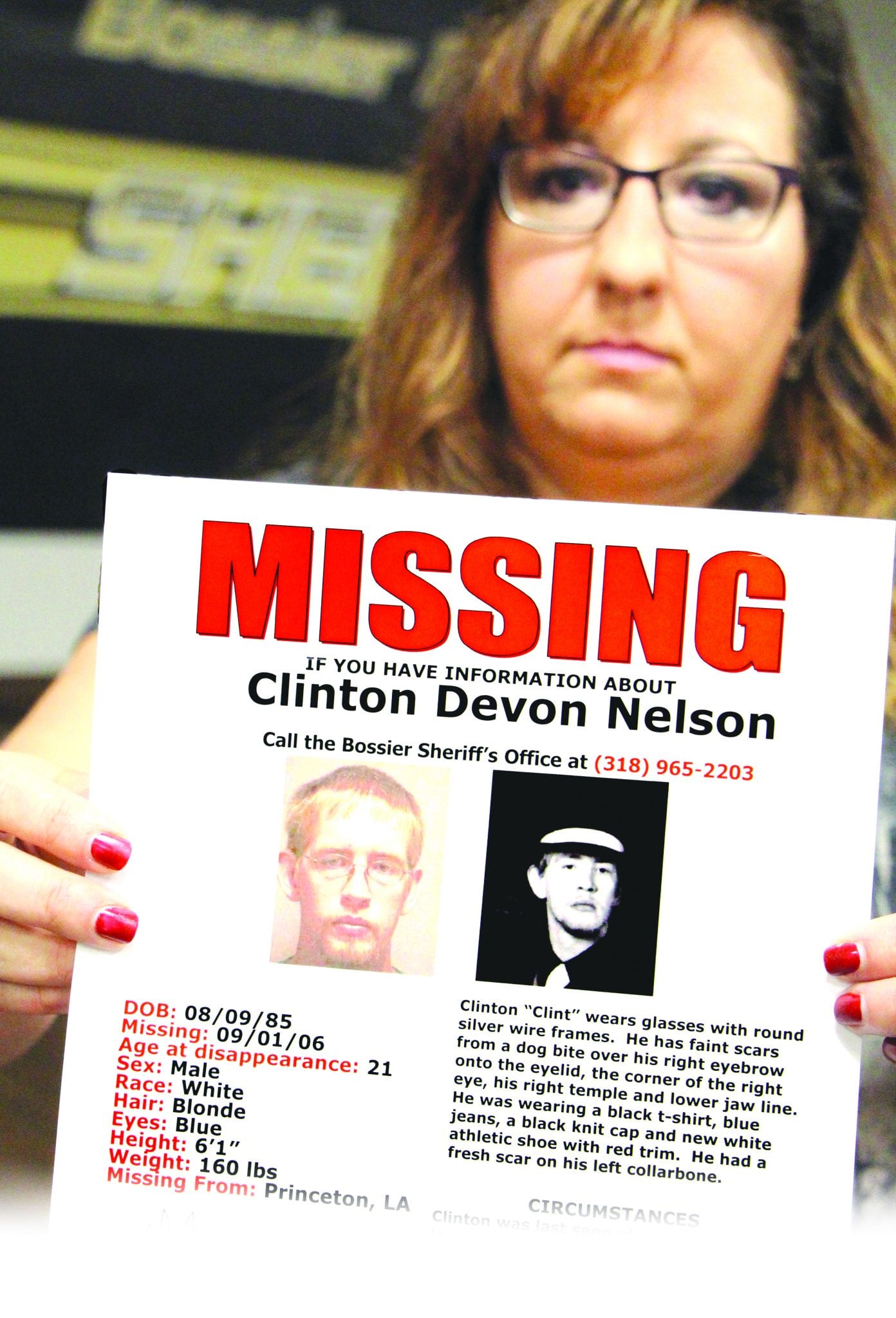 Where is Clinton Nelson?

It’s a question his mother, Carolyn Johnson, has asked herself daily for the last decade since he vanished from the Princeton area. Now on his 32nd birthday, she wants answers.

“He’s always in the back of my mind,” she said emotionally. “[Clinton] didn’t deserve this.  I know there are people out there that have the answers we’re looking for and I’m pleading for them to come forward and tell us what we need to know.”

Clinton “Clint” Nelson was just 21-years-old when he went missing Sept. 1, 2006. He was last seen leaving a friend’s residence on foot in the vicinity of Ward Lane and Highway 80.

What happened next is a mystery. Clinton was wearing a black t-shirt, blue jeans, a black knit cap and new white athletic shoes with red trim the night he disappeared. He also wears glasses with round silver wire frames.

A tip received by the Red River Parish Sheriff’s Office recently led Bossier and Red River detectives and deputies on a nearly three-day search in a wooded area just behind an abandoned trailer home off of Highway 507, about 11 miles south of Coushatta on Highway 71. The search began just before noon July 25, but was called off on July 27.

Johnson has received calls from detectives before about potential leads, but this time was different.

“It’s always scary,” she said. “It’s a very mixed emotional feeling. On one hand, we’re really hoping and praying that this will be the time they find him and it will all end. But as a mom, you don’t want to pray that they find your sons remains.”

Unfortunately, this search turned up empty.

“They did find some fabric that they are having tested,” she said. “I think they felt like this was a credible lead. I think they were expecting to find Clinton there. I’m sure it was disappointing for them to have this credible lead and it didn’t go anywhere. There are so many different things that could have transpired and I do know that more leads came out of this.”

Because of this, Johnson reinstated the $20,000 reward for anyone who can lead them to the location of Clinton’s remains and the arrest/conviction of the person or persons responsible. The reward money is offered until Aug. 9, Clinton’s birthday.

“We need the person or persons that were there and know who was involved to come forward,” she pleaded. “We need them to tell us what they know. We need that firsthand information.”

The hardest part of all this, Johnson said, has been continuing life without Clinton.

“The people I love the most are hurting and I can’t fix it,” she said tearfully. “Watching my daughter and my grandson go through this…my daughter just got married. The day of her wedding was filled with tears because she wanted her brother there. It’s so unfair that he wasn’t there. His son will ask me questions…how do you tell a 10-year-old child that somebody out there knows the truth, but is cold-hearted enough that they aren’t willing to share that information.”

No matter what happened to Clinton, Johnson just wants answers.

“It’s never been about somebody being arrested and convicted for what happened that night. That’s something they will answer to God for,” she said. “I’m to the point now that I’m so angry that human beings can do this to another human being. It’s so hard for me to fathom that someone did this intentionally.”

She continued: “Clinton was a kind heart. He was a gentle soul. He was someone that would give the shirt off his back to help someone else. I want him home so we can give him a proper burial. That’s the only thing I’ve ever wanted out of this – to bring my boy home.”

Anyone with information about this case is urged to contact the Bossier Sheriff’s Office or the Crime Stoppers line at (318) 424-4100.