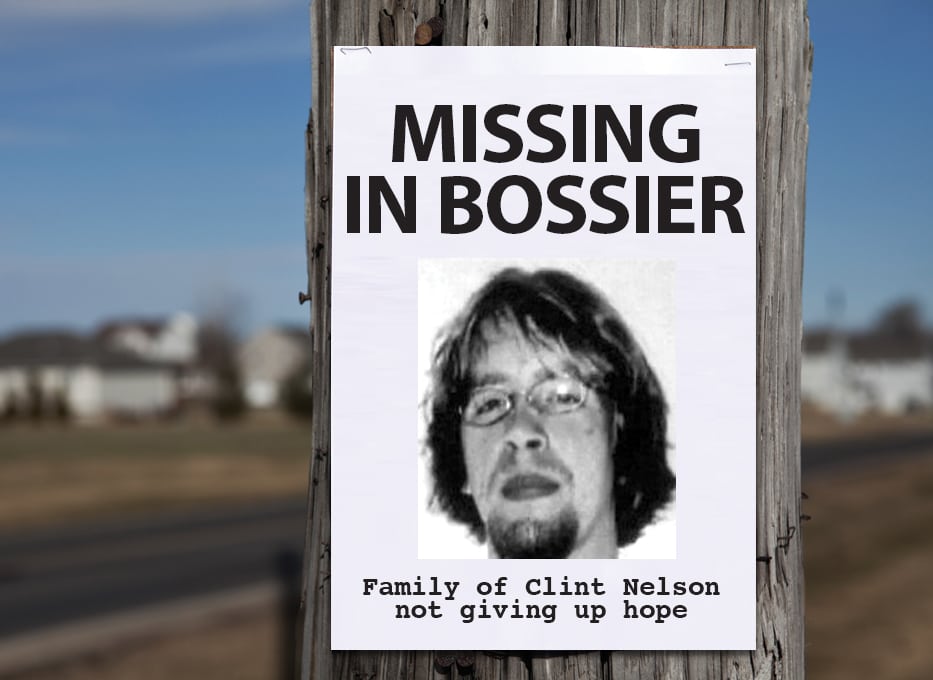 Imagine your son left home one evening to hang out with his friends and then just never came back. Now imagine that was more than 10 years ago.

That is the life of Clinton Nelson’s mother, Carolyn Johnson.

It’s been 12 years since Johnson’s 21-year-old son disappeared without a trace.

Although that much time could potentially dull or discourage hope of at least finding out what happened, Johnson has stayed defiant. Her determination to find out information about her son’s disappearance has only grown stronger as each passing year brings no more resolution.

“I just want to see my son. I just want to give my son a proper burial or a final resting place. I want to be able to answer the questions that his son asks me about what happened to his dad,” she said.

On Sept. 1, 2006, after attending a Labor Day weekend party, Clint Nelson went missing from a residence near US Hwy. 80 and Ward Lane in Princeton.

Clinton was raised in Spearfish, SD, but moved to Bossier Parish in April 2006 to get to know his biological father, Jeff, and to work in the oil filed industry.

Clinton was last scene leaving the residence on foot around 8:30 p.m. in an unknown direction. He was last seen wearing a t-shirt, blue jeans, and a new pair of white tennis shoes. Clinton wore distinctive round glasses with silver wire rims. Clinton is 6’1” tall, weighing 160 lbs. with blonde hair and blues eyes.

“We have a mom out their that doesn’t know what happened to her son for 12 years,” Lt. Banet said. “Call me if you have any information.”

Carolyn Johnson will never give up hope that someone will come forward with information that will lead to the findings of her son’s remains and the conviction of the person(s) involved in his disappearance.

What happened to Clinton remains a mystery, but his family and law enforcement are not giving up.

Bossier detectives consistently reach out to the public to retrieve information or develop any leads regarding Clinton’s case. Having put up bill boards, television, flyers, going door to door and reaching out on social media.

“Someone has information that will help us bring closure to his family,” said Sheriff Julian Whittington, in a news release. “Please speak up, and give us a call.”

“I’m not a detective. I’m not equipped to do what they do. But I have gotten a lot of leads in the past. Including in the beginning when law enforcement didn’t really think Clint was missing. When someone contacts me I usually gather as much information as I can and give it to law enforcement. Or ask them to contact law enforcement with the information they have directly,” said Carolyn.

Lt. Chad Madden, former lead detective on Clinton’s case said, “ Any information that we get in, we run it down. No matter what information it might be. It gets investigated. We go until we can’t go any further, we follow it to the fullest.”

Through an anonymous donor there is now a reward of $100,000 for new information that leads to the arrest and conviction of the person(s) responsible for Clinton’s disappearance. The reward expires on Dec. 31.

Even if Johnson finds out what happened to her son, it still can’t fill the void left in her heart by having him around.

“I sit and wonder what he would look like? Would he be the same loving person and do all the crazy voices and antics that always made me laugh? I would give almost anything to be able to sit and have a conversation with him,” said Carolyn.

Anyone with information regarding Clinton’s case is urged to contact the Bossier Sheriff’s Office at (318) 965-2203 or Bossier Crimestoppers at (318) 424-4100. Your information may just be the lead the detectives need to help bring closure to Clinton’s family.