No matter what Waller Elementary School needs him for, paraprofessional Phil McMillian is there.

He has been the PTO President for nine years, despite the fact his own children are now in high school. Have a problem with technology? Teachers and administrators call Mr. Phil. McMillian helps run audio equipment for Waller’s special events. Even Haughton High School is quick to turn to McMillian, who is the Band Booster President and volunteer sound man for HHS productions. 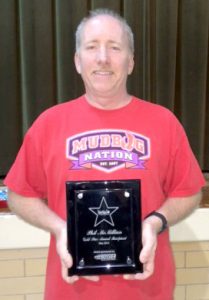 “He’s one of those employees that principals wish they had a hundred of,” said Lisa Nix, Principal at Waller Elementary. “He does the work of five or six people, if that’s possible. He always goes above and beyond. He’s always positive. Everyone loves him.”

With those accolades, it is no wonder the former B-52 crew chief that became an educator was chosen as winner of Bossier Schools’ Gold Star employee award. Children chanted “Mr. Phil! Mr. Phil!” when his name was announced and his fellow teachers gave him a standing ovation when representatives from Bossier Federal Credit Union presented him with a plaque and giant cookie cake.

“He does so much. He’s one in a million,” Nix said as she smiled, watching the excitement unfold.

McMillian is a paraprofessional in the fourth and fifth grade Special Education program at Waller. His genuine concern for students goes far beyond the classroom, though.

Jessica Raley, who teaches at Haughton High and nominated him for the Gold Star award, wrote, “Phil is a hard working man, not only at the school he works at but also at the school his children attend. Phil was a HUGE asset to our Drama Club Spring performance. If it weren’t for him, we would have not had the amazing lighting and sound that he provided. He is a humble and selfless man. He gave many hours of his free time to assist us. This is why he needs a BIG Gold Star Award!”

Kelli Shaw echoed those sentiments, saying “On his own time (and he spent MANY hours of his own time), he came to Haughton High School and worked tirelessly in our auditorium fixing our light board, lights and doing every extra job imaginable. To find a parent who would invest that many hours with no payment, recognition or reward is refreshing and encouraging to me as a teacher. Mr. Phil simply does things out of the goodness of his heart and expects absolutely nothing in return.”

Even when surprised by the Gold Star award, McMillian was quick to praise his colleagues at Waller for the job they do each day and tell the children they are his inspiration.

“I enjoy being a part of enhancing their education and experience here,” McMillian said. “That’s one thing I love as Haughton High School Band Booster President; getting to see what these kids can become. It’s all about preparing them to be successful.”

He went on to say, “I love when a kid comes up and hugs me. I don’t need my name out there, but to know they’re appreciative of it, that means a lot. I love every moment of it. It’s the greatest job in the world.”