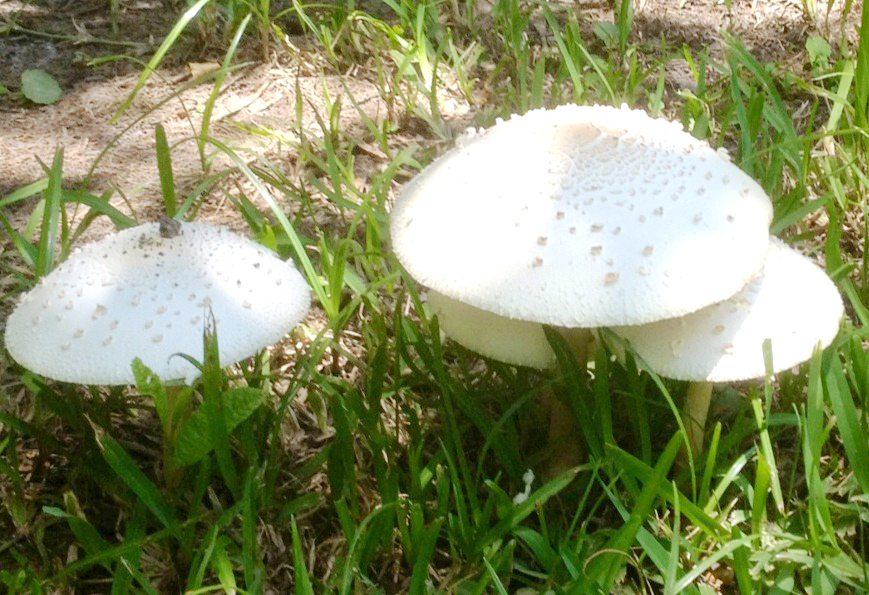 After a rainy period in summer, we typically see mushrooms popping up everywhere. Some people are concerned, some are curious, and some are downright irritated when these strange growths appear in landscapes.

First, we need to understand that mushrooms are produced by fungal organisms. Most fungi grow best when abundant moisture is available, so it is typical to see increased fungal activity during and after wet weather. No one particular fungus is responsible for all the mushrooms we see. A wide variety of fungi (plural of fungus) produce many different sizes, shapes and colors of mushrooms.

When I say the word “fungus” to most gardeners, the immediate response is negative – and there’s good reason for this. For plants, fungus organisms cause the majority of plant diseases.

Damage caused by pathogenic fungi includes leaf spots, root rot, stem cankers, fruit rot, galls and wilts. Fungal infections can seriously affect the beauty of an ornamental, ruin a beautiful tomato or kill lawn grass. They can rot out the heart of the trunk of a tree, making it more likely to break and fall over in a storm.

Is it any wonder, then, that the word fungus carries such strong negative connotations in the minds of gardeners?

But did you know?

The story doesn’t end there, however. Fungi play other roles in the environment. The vast majority of fungi do not cause plant disease and are actually beneficial to plants. Some fungi help plants. Fungi kill nematodes and insects in the soil that might attack plants’ roots, for instance. Some beneficial fungi even help protect plant roots from pathogenic fungi.

Some fungi actually enter into symbiotic, mutually beneficial relationships with plant roots. These fungi are called mycorrhiza – which means “fungus root”. And humans have a similar symbiotic relationship with the billions of bacteria that live in our guts and help us digest our food.

A large group of fungi call saprophytes is critical to the health of our landscapes. Saprophytic fungi eat and digest – or decay – dead organic matter. These fungi help keep dead organic matter from building up in nature. For the gardener, they are vital in the process of turning organic matter into compost. When you incorporate organic matter into the soil of a bed, it is the saprophytic fungi that help break it down into vital humus and release the nutrients it contains. These fungi decay organic debris in the lawn – grass clippings and dead leaves would otherwise accumulate and choke out the grass.

Saprophytic fungi are always present in our lawns and gardens, quietly decaying organic matter. We just don’t usually see them, although you may occasionally see the white threads of saprophytes when you move decaying mulch or compost. But after a generous period of rainfall, many of these fungi make their presence known by sending up mushrooms – lots and lots of mushrooms.

It’s important to understand that the mushroom is not the fungus. It is simply a growth from an organism living in the soil and the surface layer of organic matter. Mushrooms are the reproductive structures called “fruiting bodies” of certain fungal organism. Their role is to produce spores and release them. You can kind of think of them like flowers.

A rose flower is a product of the rose bush. You can pick and remove the flower, but the bush is still there and will produce more flowers. Similarly, you can remove the mushrooms you see, but the organism producing them is still there. Simply removing the mushrooms, then, does not keep them from coming back.

So, saprophytic fungi and the mushrooms they produce are not harmful to your lawn or other plants in your yard. There is no need for concern in that regard.

Because it is possible that some of the mushrooms may be poisonous, they should be promptly removed when they appear when pets or small children may have a chance to consume them. For everyone else, ignore them or mow them down.

No practical treatments exist to kill the fungi that produce the mushrooms. The fungicides available for controlling pathogenic fungi that attack our plants will not be effective, so you simply waste money and time if you use them.

Where you see mushrooms growing is related to the amount and location of organic matter and moisture available to the fungi and where, by chance, spores land and grow. So, you see variation from yard to yard and from area to area in the same yard.

As you encounter mushrooms over time, remember, they are generally harmless and can be ignored. Again, watch young children and pets and do not allow them to eat any mushrooms. Overall, though, mushrooms are a nuisance, not a catastrophe.

Dan Gill is a horticulturist with the LSU AgCenter and is known as a reliable source of helpful, useful advice on lawn and garden topics. He can be reached at DGill@agcenter.lsu.edu