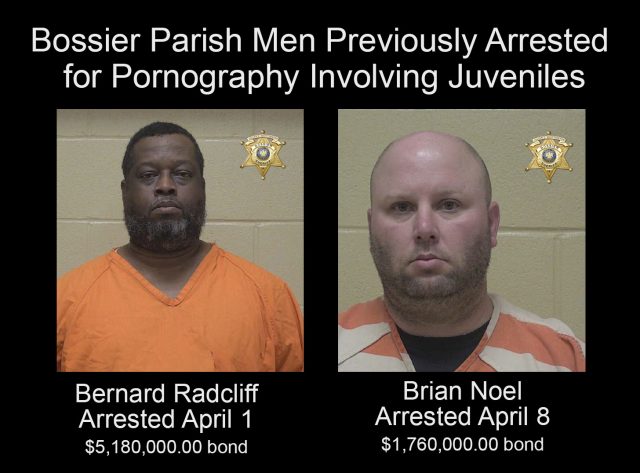 Bossier Sheriff’s Office detectives are continuing their investigations into two Bossier parish men who
were arrested on separate cases for possessing and or distributing pornographic images involving juveniles.

Bernard Radcliff, 57, of the 100 block of Fitzwilliam Street in Haughton was arrested on April 1, for
having in his possession more than 900 images of Child Sexual Abuse Images. During their initial investigation,
detectives obtained and executed a search warrant at Radcliff’s home where they found images of
prepubescence children on his electronic device. Detectives say during their interview with Radcliff he admitted
to viewing and possessing the pornographic images. During a recent forensic investigation into Radcliff’s
electronic devices, detectives located thousands of pornographic images and videos depicting child sexual
abuse, with 500 of them identified as known victims. Detectives added 500 new charges of Pornography
Involving Juveniles to his case. Radcliff’s bond is now set at $5,180,000.00.

On April 8, Brian Timothy Noel, 42, of the 100 block of Salmon Street in Haughton, was arrested after a
search warrant was obtained and executed at his home. Detectives found Noel in possession of five images
depicting child sexual abuse of prepubescent juveniles on his phone. The images were hidden in a social media
app. During their investigation detectives also discovered that Noel shared the images via that social media app and his email account. After a recent forensic investigation into Noel’s electronic devices, detectives discovered
another 151 images of pornographic images depicting child sexual abuse. Detectives added 151 new charges of
Pornography Involving Juveniles to his case. Noel’s bond is now set at $1,760,000.00.

Both cases are still under investigation. Both men are currently housed in the Bossier Maximum-
Security Facility in Plain Dealing.