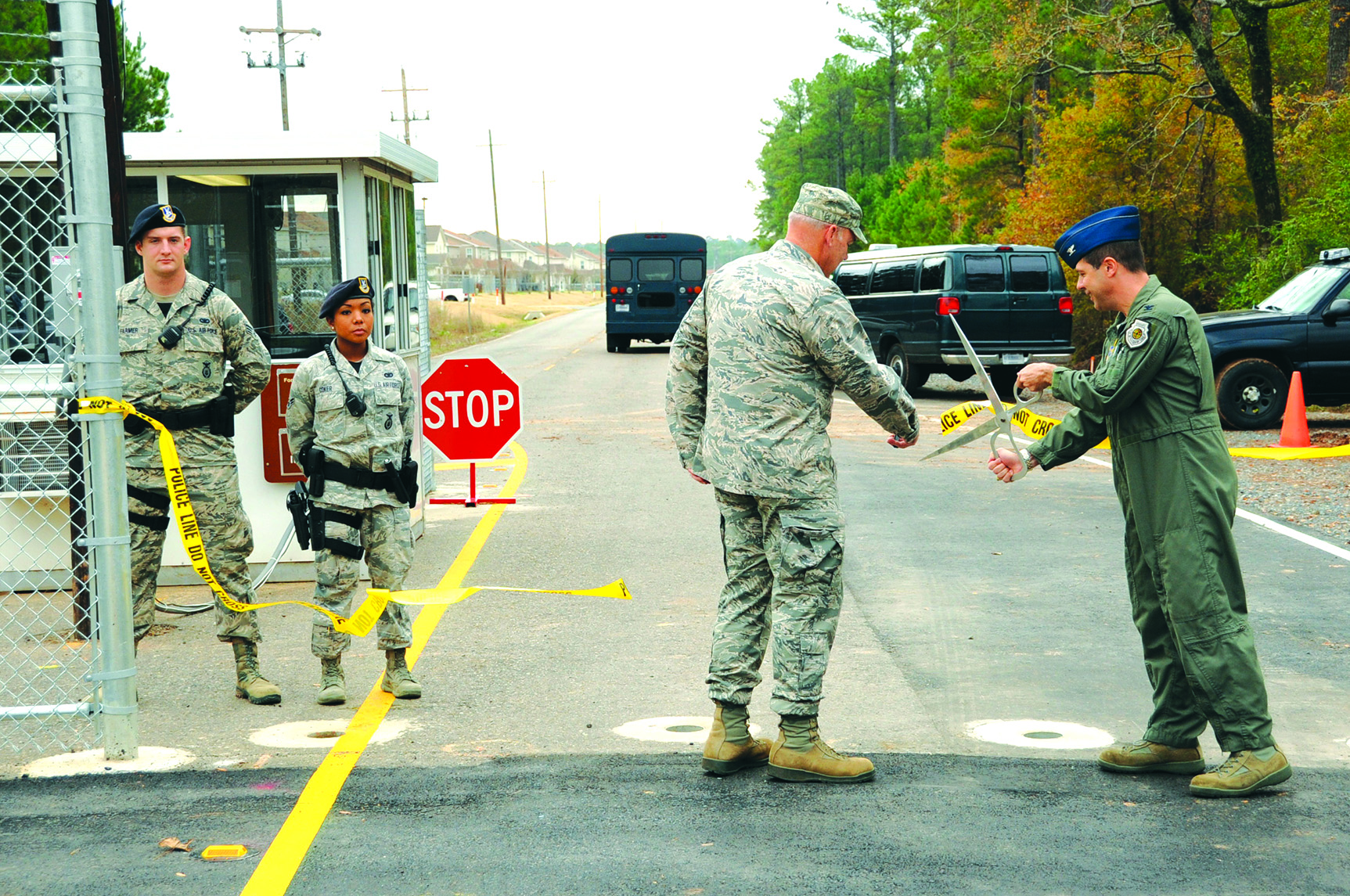 It’s been two weeks since a new entrance opened to Barksdale Air Force Base, and officials are hoping to see another major one before long.

The Bodcau Gate, located on the East Reservation, officially opened Dec. 2 in a ribbon cutting ceremony. Parish officials worked in conjunction with the base for years to see the gate opened.

And it came at the perfect time as the North Gate closed for renovations.

A construction project began Dec. 2 that resulted in the closing of the North Gate to automobile traffic for up to four months. That gate will be receiving upgrades to improve base security and working conditions for 2nd Security Forces Defenders.

“Due to the closure of North Gate, it’s been interesting trying to get into the base. Their options are limited, so this helps give another avenue,” said Parish Administrator Bill Altimus.

The Bodcau Gate has been an idea for several years, and now the 2,000 residents of the East Reservation will have quicker access to the Haughton-Red Chute area.

“It’s been a real benefit to people on the (East Reservation) because now they can get right out to grocery stores, restaurants, and pharmacy in the (Red Chute-Haughton) area,” said Altimus.

This traffic to the area only furthers the growth along the Highway 80 corridor, something parish officials have had their eye on with the new parish wide sewer system.

“Everything in that area goes south through the base, so from an environmental standpoint, the new sewer system will help that,” said Altimus. “As businesses and residences continue to develop in Highway 80 and Haughton, (the new sewer system) is going to be a huge advantage.”

Looking ahead to 2014, the parish is also hoping to get long dormant plans approved for a new gate entrance to the base off the I-20/I-220 interchange.

Designed in the early 1970s, the parish is hoping to obtain a design exception to save money and speed up the process.

“The entrance had been built according to the plans of that time. Things have changed as far as curves, speed, approaches, lanes, etc.,” said Altimus.

Currently, DOTD is performing an environmental study and reviewing the geometrics of the intersection.

“If it had been built in 1970, you’d be driving on it now and it wouldn’t be any less safe. If we can use those plans, we’d save millions of dollars. The Louisiana Department of Transportation and Development is looking to see if this would be good, bad, or indifferent,” said Altimus.

If all goes according to hopes, the state will come back with its verdict in a couple of months and then hold community meetings to get public comments about the proposed gate.

“This has been drawn out way too long, in our opinion,” Altimus said. “The new gate is vital for Barksdale. It puts you right into the area that is prime for development. And from the base perspective, that would be a great entrance for them.”

This talk of new entrances, growth, and improvements to Barksdale is important in the face of what could be drastic changes to the armed forces. Many expect a Base Realignment and Closure committee to form next year.

“Services are begging for a BRAC, where budgets have been cut but nothing can be closed. So something’s got to give in the future. Congress doesn’t want it to happen so who’s to say how it will all shake out,” said Altimus.

For Bossier’s number one employer, it’s important to protect the vitality of Barksdale and anything that shows the community support for the base is a good thing.

“One gate is not going to save or kill Barksdale. But the support it took to make that happen — federal highway, DOTD, school board, police jury, Bossier City — things like that have meaning. I can’t tell you how many people I’ved talked to in Air Force leadership who can’t believe the cooperation and support among the public for Barksdale and I think that reverberates around the entire Air Force,” Altimus noted.

“All we can do is be supportive of the base because that is in the best interest of the community.”