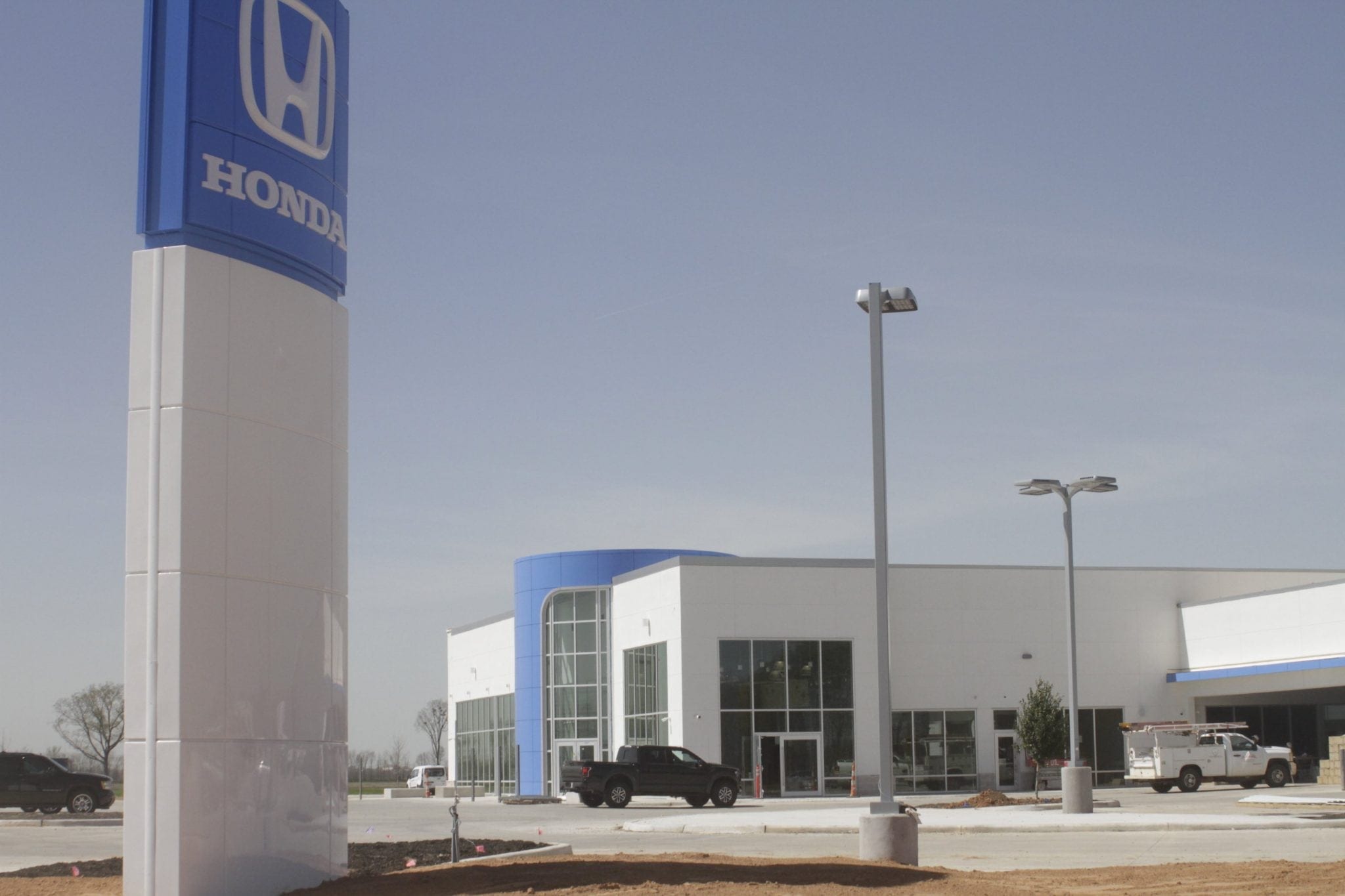 The new Holmes Honda dealership on Innovation Drive in north Bossier City is set to open in early May.

“It’s a big, state-of-the-art, full service store,” said Holmes Vice President Keith Hightower. “Bossier City is a big, big market for us. We didn’t have to look long and hard to know that a huge part of our customer base is here. We think hopefully we’ll be able to reach people who haven’t wanted to drive to the Shreveport location.”

The similarities are part of Honda’s rebranding of its dealerships nationwide. The new Bossier City dealership is the prototype for new construction with the rebranded design, Brown said. The Holmes Honda dealership on Bert Kouns Industrial Loop in south Shreveport was one of the first existing dealership to be remodeled with the new design.

“Holmes is kind of on the front of that,” Brown said. “We redid their dealership in Shreveport. It was the first with this new look, and it’s been very well received. It goes along with their new push to appeal to a younger, more hip customer. If you’ll notice in the new Hondas there are a lot of touch screens, not a lot of knobs. Lots and lots of USB ports. The bigger cars are geared more toward families, but they are toward families with small children. This is supposed to appeal a little more to that group.”

Brown said she appreciates the opportunity to work on both the renovation and new construction for Holmes Honda. She added that each projects has its unique challenges.

“Obviously, when you are doing a renovation of an existing, high-traffic dealership that doesn’t want to be inconvenienced or shut down in any way, that’s a challenge,” she said. “We pride ourselves in being able to do that.

The recent rains were not a factor for the project, Brown said.

“Weather effects a construction project the most in the first few months until you get in the dry,” she said. “It was a little tough to get the site ready and get the paving in. This project started ahead of the really bad weather. We’ve had other projects that were hurt a whole lot more.”

The new dealership is at 1040 Innovation Drive, next to the Bossier Parish School for Technology and Innovative Learning.

“I think the location is going to enable Bossier City to have an extra east-west corridor as a result of us coming onto the property,” Hightower said. “So, we’re excited about it. It’s easy. It’s not as congested. We think once Innovation Drive gets built through to Greenacres Place and connects to Airline (Drive), then it will be a heavily used road, and that’s just what we want — a non-congested way for people to car shop.”

“They have this whole area from here to Target master-planned,” she said. “We were pleased that the Holmes Group branched out a little bit — came off of the over-congested Auto Mall on Benton (Road) where we could spread out a little more, get more personal service for their customers. We were pleased they came on over here.”

The location also gives Holmes Honda t=more opportunity to partner with BPSTIL for training and education.

“Before we decided on the spot, we met with the principal, Jada (Spillers), and talked about emerging opportunities and new technology and what to expect coming to work right away,” Hightower said. “Easy job placement, on-the-job training. We hope to hire students to work afternoons and summers to get them into the car business, and hopefully we will retain as many of them as we can.”

Brown Builders has been in Bossier City for 67 years. Brown said she is proud her company is part of this project.

“We appreciate the confidence and the commitment that Holmes has made to our Bossier market and recognizing the growth potential in this exciting place to be and live and helping to ensure it will continue to be that way,” she said. “I’ve got teenage kids, and I want them to have a good place to raise their children. So we appreciate business making investments like this in our community and hope this will encourage others to follow these industry leaders.”

Hightower said the target date for opening is May 1, with a grand opening celebration the week of May 10. He said Honda executive from North American and Japan are expected to he here for the grand opening.

“We’re ahead of the curve, and I think that’s part of the excitement and why they want to come look and see what it’s going to look like when it’s totally done from the ground up,” he said. “All of the executives are proud of what they have to offer nationwide. It’s a neat deal to know that anywhere you go you can recognize what a Honda store looks like.”