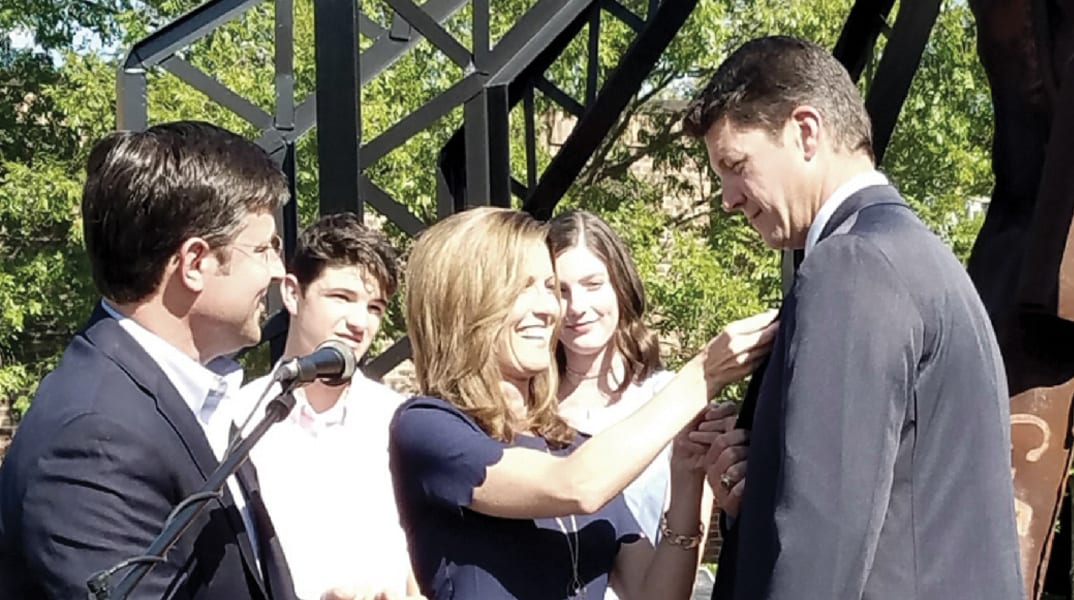 Photo Courtesy of Tom Pace: New House Dist. 8 Representative Raymond Crews (right) gets his House Rep. pin from his wife, Dianah, while US Congressman Mike Johnson (left)  looks on during a special ceremony held at the Bossier City Memorial Garden May 7.

Bossier City’s newest state legislator held a special ceremony this past weekend to thank his friends, family, and supporters before heading to Baton Rouge this week.

Raymond Crews (R-Bossier City) was elected to represent Dist. 8 in an April 29 runoff against Robbie Gatti. He will be filling the seat left by Mike Johnson, who was elected to the U.S. House of Representative for the 4th Congressional District this past December.

Crews gathered with a small group Sunday, May 7 in the Bossier City Memorial Garden outside City Hall for a ceremonial swearing in by former House Dist. 8 legislator and current Louisiana 26th Judicial Court Judge Jeff Thompson.

“No candidate is elected to office without the support of a great many people. I appreciate each of you and the effort you expended to make this possible,” he said. “Thanks to my family for supporting me in this endeavor and thanks again to all the people for this opportunity and for taking the time to recognize the importance of the people in realizing proper government.”

Crews will be taking the oath in Baton Rouge Tuesday and then head straight into the already ongoing Legislative session. He said the No. 1 thing he has to do once he arrives is to get to know his colleagues there.

“You’ve got to know who you’re working with,” Crews said, “and you’ve got to get to know their interests, because a lot of times our interests intersect and it’s just the methods of getting to those that is the challenge.”

“Alan Seabaugh, Dodie Horton, Barrow Peacock — all these people that are going to be able to speak into my work down in Baton Rouge,” he added.

His priority will be preserving the “life and liberty in Louisiana.”

“A lot of bills are going to have things in them that are detrimental to this area. We’re going to see if we can filter out the negative things and focus on the positive pieces of those bills,” Crews explained to the Bossier Press-Tribune.

“I believe the people and natural resources of Louisiana hold incredible potential. And if we  ensure liberty remains our focus, we can realize that potential,” Crews told the crowd. “We can show the rest of this country that we live in a great state and have a great community.”

With the ceremony taking place shortly after the conclusion of the Barksdale Air Force Base Defenders of Liberty Air Show, “liberty” was a recurring focus of the ceremony and his campaign, he said.

“Speaking of the Defenders of Liberty — that’s what we want to do. We want to be defenders of liberty in the political realm,” Crews told the BPT. “To be able to participate in this event with (the Barksdale Air Show) as the backdrop is really encouraging and says what’s important to this area.”

“Just as our military service members defend our liberty against military and terrorist forces, we must defend ourselves against complacency, apathy, and disinterest. Those forces also threaten our liberty,” Crews said in his speech. “I’m thrilled to announce that your interest in recent elections is proof that the citizens of our area are fighting against those forces. We are not content to sit idly by while government continues to swell as liberty shrinks.”

Congressman Johnson was in attendance for the event. He called Crews a “good man” and said he will govern “righteously.”

“Raymond has been a defender of liberty, he has flown in those same skies as an (Air Force) combat veteran. He’s a family man, he’s a godly man. All of us that know him know he is going to make the right decision,” Johnson said. “We need to elect people with character, we don’t need politicians. We need people who will make righteous decisions based upon a solid world view, a Biblical world view and that’s what we’ve got in Raymond Crews.”

Crews closed by asking attendees to not assume he and his colleagues in Baton Rouge are “experts in every area” and said he wants the public’s input.

“I want to encourage each of you to hold me accountable and to pray for me and my family. We will certainly encounter opposition — sometimes on principle, sometimes on degree,” said Crews.