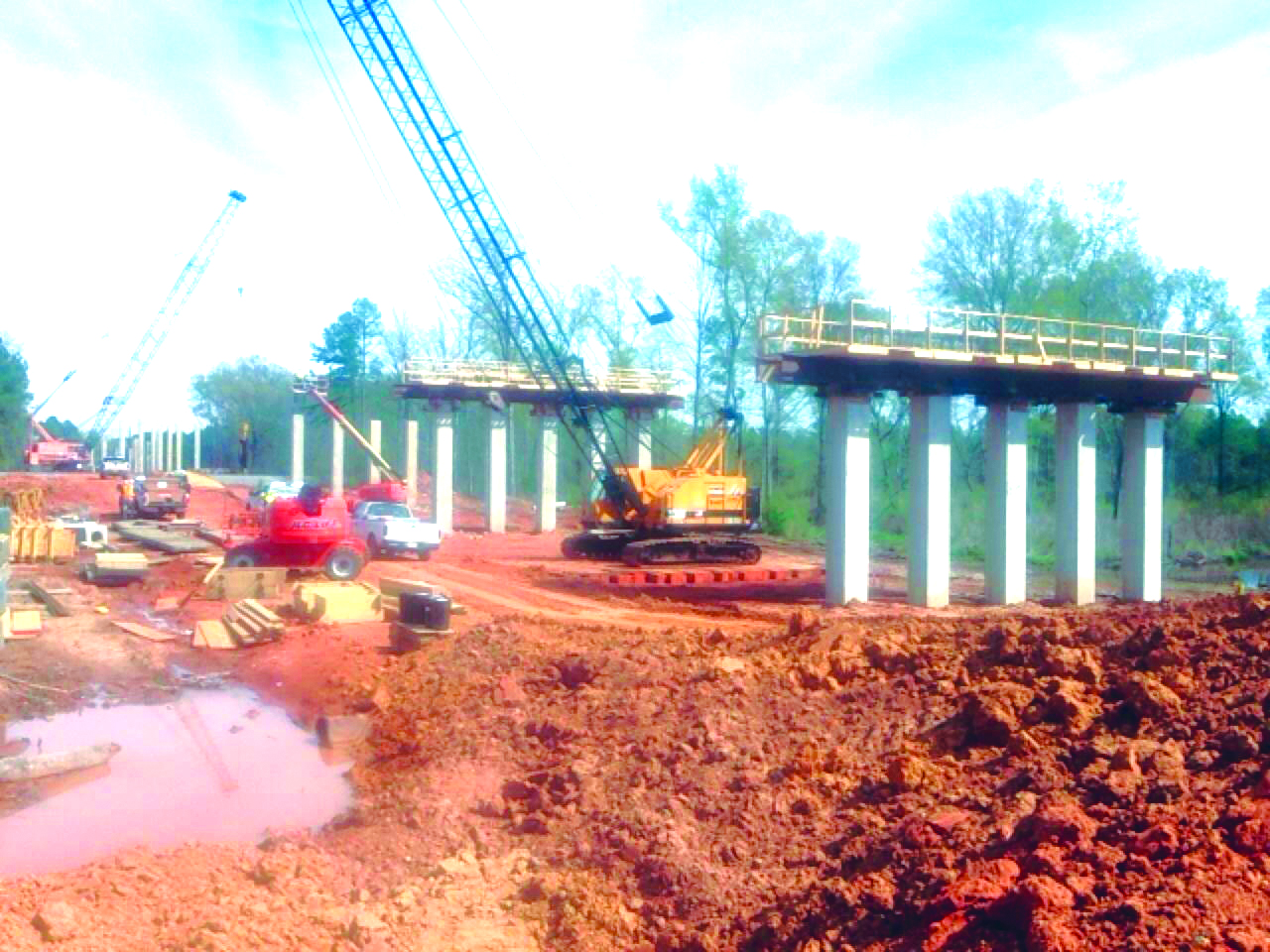 Construction of a new State Highway 3 overpass above the Union Pacific Railroad on Benton’s northern outskirts is well underway, but the bridge and realigned highway are not scheduled for completion until May 2015.

The existing bridge, built in 1938, curves westward as it arches to provide adequate clearance over the railroad and provides little larger vehicles.

“The bridge is being replaced due to the age of the structure,”said Susan Stafford, public information officer with the Louisiana Department of Transportation and Development. “The advantage of the replacement project is that it will enhance safety and improve ride quality for motorists.”

With an average daily traffic count of only 6,600, the bridge doesn’t warrant being four-laned. La 3, also known as Benton Road, is four-laned or more in Bossier City and north through Benton before reverting to two lanes near the south end of the bridge.

What the new bridge and realignment do is cut across the base of an arc of bridge and highway, providing a straighter highway without a curve and steep incline.

The new stretch of road and bridge is a little less than a mile in length from where it departs from the existing roadway and reconnects north of the railroad.

Construction began in November 2013, with James Construction Group, LLC, serving as general contractor for the project.

Total cost of the project is about $8.7 million, with approximately $6.9 million in federal funding and $1.7 million in state funding.

Louisiana 3 serves as the most direct route connecting Plain Dealing with Benton, the parish seat. The rerouting allows the existing bridge to remain open to traffic during construction. Once the new bridge and roadway are completed, the old bridge will be demolished.

Priorities for bridge replacements or repairs are based in large part on a sufficiency rating formula that provides a percentage in which 100 percent represents a completely sufficient bridge and zero percent represents a completely insufficient or deficient bridge. Stafford said the rating is based on a combination of several factors and is not a “safe”or “unsafe” rating. Some factors going into the report include road width, daily traffic volume and slope.

Information about the existing bridge’s sufficiency rating was not readily available.

If a bridge were determined to be unsafe, Stafford said it would be shut down. The posted weight limit for a bridge can be lowered to ensure a bridge is structurally capable of handling certain types of vehicles and loads.

The new bridge will have no weight limit, Stafford said.