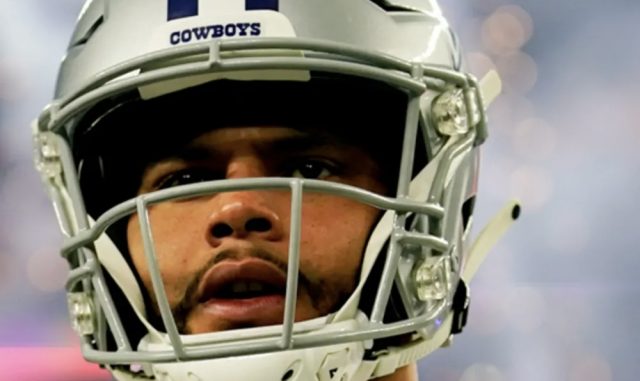 Playing in his first game since suffering a season-ending injury to his right ankle in Game 5 last season, the former Haughton star completed 42 of 58 passes for 403 yards and three touchdowns with one interception.

Prescott completed eight passes on an 11-play, 60-yard drive that ended with a 48-yard field goal by Greg Zuerlein that gave the Cowboys a 29-28 lead with 1:29 to play,

But Tampa Bay quarterback Tom Brady and the Bucs answered with an 11-play, 57-yard drive to the Cowboys 18. After three straight incompletions, Ryan Succop kicked a 36-yard field with 2 seconds left to give the Bucs the victory.

“We came up short, bottom line,” Prescott said in his postgame press conference. “Obviously, we fought hard. We fought all the way there to the end. That’s a good football team we’re playing. They got us  by a field goal right there.

“We’ve got to be better situationally, in the red zone. Defense did a great job giving us chances when we didn’t convert touchdowns or field goals, getting us the ball right back. They did an incredible job. We’ll do a better job because of this one. Obviously it was tough. It’s tough any time you don’t win. It’s the expectations for this team and myself.”

Prescott’s first TD pass went to CeeDee Lamb for 22 yards in the first quarter. He hit Amari Cooper with TD passes of 5 yards in the second quarter and 21 in the third.

His one interception on a tipped pass across the middle was costly. It set up a touchdown that gave Tampa Bay a 28-19 with 6:27 left in the third quarter.

Prescott dealt with a muscle strain in his throwing arm in training camp and didn’t play in a preseason game. But he wasn’t surprised he was able to play at a high level.

“I didn’t plan on throwing it that many times,” he said. “I never questioned my health or being able to throw it 50 times or how I’d feel out there. I knew all the work I put in over the offseason through training camp, just everything, that I expected to go out there and leave it all out on the field and do what I needed to do to help this team and give us a fighting chance.

“I don’t feel like I say things just to say ‘em so that’s just a credit to all the work I put in. When you invest that much work and rehab and prehab and everything that has just gone into the last 11 months for me to get back on the field you’re not surprised about the way I went out there and fought, ran the ball a couple of times and did things that I normally do 11 months ago. So I feel like I’m a better player than when I left the field and I told y’all that was the expectation I had for myself and I’ll continue and try and get better game in and game out.”

Prescott is in his sixth year in the NFL and started every game for the Cowboys until last season’s injury. Thursday night’s performance was his fourth career game of 400 yards or more.

The 44-year-old Brady completed 32 of 50 passes for 379 yards and four touchdowns with two interceptions.

The Cowboys return to action Sept. 19 against the Los Angeles Chargers at Sofi Stadium in Los Angeles.