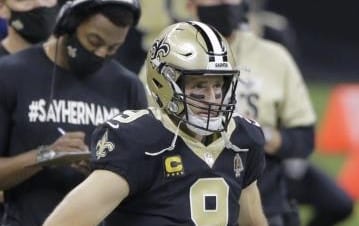 New Orleans finishes off the 49ers with Drew Brees and other key Saints sitting on the sidelines with injuries.

Week 10’s victory over the San Francisco did not come without a price of sorts for the New Orleans Saints.

The NFC co-leaders, who are currently tied with the Green Bay Packers, a team they lost to in Week 3, downed their longtime rivals despite a flat, uninspired first quarter and four of their key players, including Drew Brees, sitting on the sidelines in the second half.

The most prolific quarterback in league history sustained a rib injury and decided to halt play after throwing a touchdown to give the Saints a 17-10 halftime lead.

The 41-year-old Brees, who missed five games at the start of last season due to a thumb injury against the Rams in Week 2, had not missed more than a single game in a season for 15 straight years prior to 2019.

“I was not going to be able to be effective. It had nothing to do with pain,” said Brees about not returning to the game in the second half after going 8-for-13 for 76 yards in the first two quarters of play.

Even on the go-ahead scoring drive, a three-yard TD pass to Alvin Kamara, inside the final two minutes of the first half, Brees was in trouble before making the short throw to give the Saints the lead.

“I actually felt terrible before the two- minute drive, but I had to find a way,” admitted the current season leader in passing accuracy with a 73.5 completion percentage.

“You always worry about halftime because you sit for so long,” said Brees. “And so, when I came out the second half and started throwing the ball, it became really apparent that I wasn’t going to be effective.”

Winston, who led the NFL with 5,109 passing yards last season, went 6-of-10 for 63 yards, while Hill failed to attempt a pass, but recorded 45 yards on eight carries (5.6-yard average) and suffered one sack.

“I thought he played great,” said Brees of Winston’s performance. “Listen, that’s a tough, it’s a tough job, you know, especially when as elaborate as our game planning is on offense especially.

“I thought he had great command of the huddle and everything, kind of went off without a hitch.”

Smith suffered a concussion on an incomplete pass in the second quarter.

As for Brees, he is cautiously optimistic following a scheduled MRI and X-Ray.

“I’m just taking it one day at a time. I have done that this entire season. And I will continue to do that,” he said. “I am not sure what tomorrow holds. But you can know I’m going to do everything I can to be as effective as I possibly can for next week.”