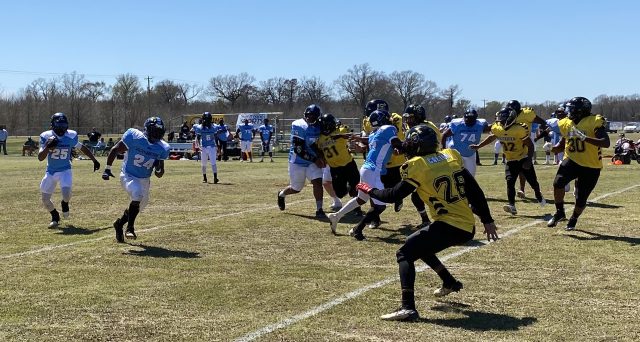 Opening day featured the Lumberjacks taking on the Bombers, followed by a
Rattlers versus Roughnecks matchup. Saturday’s contests are part of a 10-week
schedule, playoffs included, and will include one bye-week.

NLFA is a nine-man developmental football league comprised of centrally owned
and operated teams. All teams will play their games at one scheduled location
within the Ark-La-Tex region during the regular season. The league is the first to
attempt to brand nine-man adult tackle football as a professional minor league.

League President Holland Witherspoon said the NFLA features outstanding
athletes who have graduated from high school or junior college but did not have an
opportunity to further their playing career at higher levels. Some players from the
league have been scouted by arena football teams and added to rosters.

Week two of league play will feature the Bombers versus the Rattlers at 2 p.m.
followed by the Lumberjacks and Roughnecks at 4:15. Games will be played at
South Bossier Park. Later in the season, games will be played in Minden’s
recreational complex to introduce the league to additional fans.