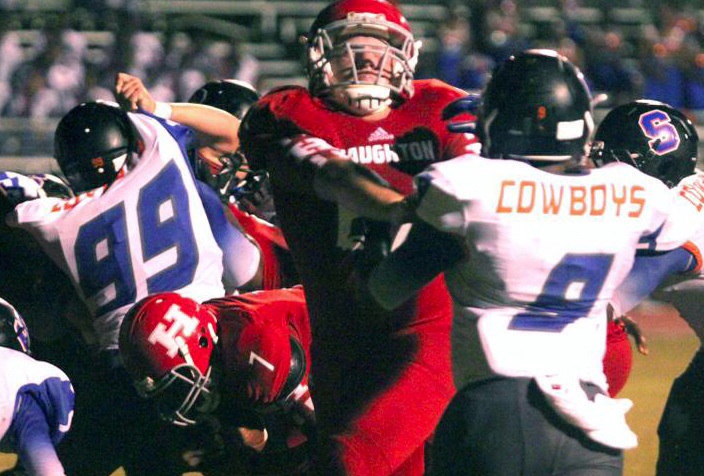 When the Southwood Cowboys grabbed a 7-0 lead midway through the second quarter Thursday night at Harold E. Harlan Field it was like a wakeup call for the Haughton Buccaneers.

The Bucs scored a late touchdown in the first half and then pulled away in the second for a 28-7 victory in a District 1-5A opener.

Haughton improved to 6-0. Southwood dropped to 2-4.

The Cowboys came out determined to make a game of it. They moved the ball well behind the running of quarterback Keytron Crowder and Treveon Morris.

Haughton had the first scoring threat, though. Thanks to some hard running by Kei’Untre Normandin (163 yards, 16 carries), the Bucs moved deep into Southwood territory. Josh Lister caught a pass from Will Haines but he fumbled near the sideline and Southwood recovered at the 3.

The Cowboys then proceeded to drive 97 yards for the first score of the game. The big play in the drive was a long run by Morris.

Southwood forced a punt on Haughton’s next possession. Thanks to a sack, Haughton forced a punt and the Bucs took over with 2:26 left in the half.

Haughton moved quickly down the field and quarterback Will Haines scored from the 1 with 33 seconds left. The first of Nico Broadway’s four extra-point kicks made it 7-7.

Haughton had one other scoring opportunity early in the first quarter but turned it over on downs.

“We had two opportunities to score in the first half and we should’ve punched it in,” Haughton coach Rodney Guin said. “I think the game may have been different. I don’t know. There are no easy games in this district. You’ve got to expect the beat of everybody every week.”

Guin said the Bucs did some good things in the second half.

One of those came in the third quarter when Chance Brown blocked a punt to set up the Bucs’ second TD, a 19-yard pass from Haines to Antonio Woodfork on fourth-and-10. Woodfork did a nice job of adjusting to the ball around the 5.

“That was a big play,” Guin said. “That’s what we didn’t do in the first half. We had a chance to make some big plays and we fumbled the ball on one and dropped three or four passes. But, you know, we’ll take it.”

Then the Haughton defense stepped up and made a big play.

Southwood was moving the ball well and appeared to be driving for the tying score. But early in the fourth quarter, Haughton’s Mason Moreau recovered a fumble at the Bucs 25.

A few plays later, Lister turned a short pass from Haines into a 42-yard touchdown. The Bucs’ final TD, a 5-yard Normandin run, came after Southwood came up short on a fake punt deep in their own territory.

Haines completed eight of 18 passes for 118 yards with one interception. Lister had four catches for 77 yards.

Southwood kept the ball mostly on the ground and the Cowboys gained 253 yards. But the Haughton defense had some timely sacks and big stops, especially in the second half.

Jeremiah Wilson and Quentin Brown had interceptions. Michael Harris led the defense with eight tackles, including 2.5 for loss. Mason Moreau had 6.5, Duncan Smith 6.0 and JT Bledsoe 5.5.