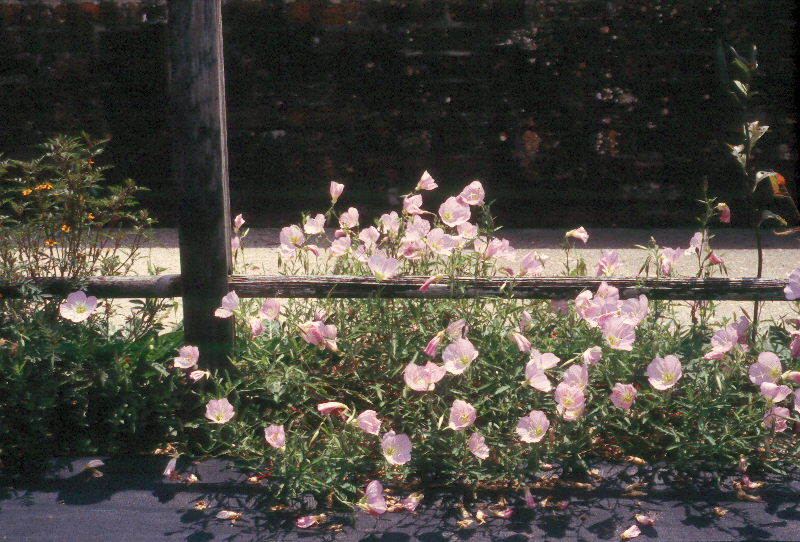 Mention blooming wildflowers, and most people think of country meadows and drives along rural roads. Wildflowers, however, are to be found everywhere, including cities and suburbs as well as in the country.

Spring wildflowers delight the eye in the most unexpected places. From cracks in pavement to the banks of drainage ditches and along major highways and Interstates, these intrepid plants open flowers of yellow, pink, white and purple.

When considering wildflowers, I think it’s important to get the term “weed” out of the way. We use the word weed to refer to plants that are growing where we don’t want them and causing use some type of problem. It is a human designation that has little to do with the plant itself. A rose bush would be a weed if it was growing in the middle of a corn field. Some of the plants we regard as wildflowers may also appear in lawns and flower beds, and in those situations they could be considered weeds.

Bright yellow is a common color for spring wildflowers in Louisiana. Perhaps the most showy and noticeable is butterweed (Packera glabellus). This plant likes poorly drained, wet areas and can be seen along drainage ditches and in low areas. The upright plants grow from a basal rosette of irregularly cut leaves and produce clusters of golden yellow, daisy-like flowers from late January through April. An annual that grows about 2 feet tall, individual plants are quite noticeable. But when an entire field of them comes into bloom, the sheet of intense gold they produce is remarkably beautiful. I think they are attractive enough to be used in flower beds.

Another of my favorite yellow wildflowers is the spiny buttercup (Ranunculus muricatus). You will notice that yellow wildflowers often have the word butter in their name. Also tolerant of damp locations and even shallow standing water, spiny buttercups produce branched stalks about a foot tall bearing numerous five-petaled flowers. The flowers are brilliant, true yellow without a trace of orange. They show up beautifully against the ground-level, bright green, shiny leaves that are round with ragged edges.

A noticeable departure from the yellow wildflowers is the lovely and delicate pink Mexican primrose (Oenothera speciosa). The color may be delicate, but the plant is tough as nails. You frequently see this perennial plant blooming merrily along the edges of streets and highways in harsh, dry locations.

Low-growing Mexican primrose plants form a carpet about a foot tall where they grow, and the flowers may be dark pink to white. When they are in full bloom from March to May, the foliage is completely covered by the flowers. This is one native wildflower that has made the transition to the ornamental garden. Seeds and plants are available in many gardening catalogs (often at surprisingly high prices for a plant we tend to take for granted). It is easily grown from seeds and will bloom in spring from a fall sowing.

Although its purple flowers are relatively small, henbit (Lamium amplexicaule) produces them in such large quantities that they can still make quite a show. This cool-season annual produces purple flowers that are tubular with two lips – typical of members of the mint family, to which henbit belongs. The foliage is dark green and scalloped around the edges. Patches of henbit are common in lawns, roadsides and even agricultural fields. They can form a low carpet of purple color over a relatively large area noticeable even from a distance.

Dandelions (Taraxacum officinale) are a common perennial wildflower whose foliage is edible. The low rosette of coarsely toothed leaves produces individual flower stems that bear showy, golden yellow flowers. The seeds are produced in fluffy, round heads which are irresistible to children (and the occasional adult) who pick them, make a wish and blow until all the seeds fly into the air. The common name is derived from the original French name for this plant, dent de lion, or lion’s tooth, referring to the jagged teeth along the leaf edges.

Finally, look for the white to pale pink flowers of the annual daisy fleabane (Erigeron philadelphicus). The plants grow about 2 feet tall and produce fuzzy leaves about 5 inches long close to the ground. At the top of the plant, daisy flowers about one-half-inch wide with bright yellow centers grow in clusters. Rarely a garden weed, this delightful plant blooms from February until May.

The term “daisy” is used to name many flowers that have a ring of petals surrounding a central, usually yellow, disk. It is derived from the old English term for the sun, day’s eye, because the flower’s shape reminded people of the sun.

Look around as you travel, and you will see these as well as many other native wildflowers. Some people just see weeds. But with a little shift in viewpoint, you can appreciate that these delightful plants make a lovely addition to spring in Louisiana cities, suburbs and rural areas.