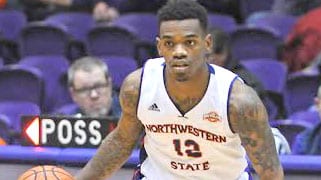 West will return to the NSU men’s basketball team after tearing his ACL in the final minute of this season’s opener at Ole Miss in his fifth season of eligibility.

The Bossier City native’s collegiate future was in limbo after he missed his freshman season because of an NCAA Clearinghouse issue. Student-athletes have five years to play four seasons, but the NCAA can grant players a sixth season under extenuating circumstances.

“I cried when (NSU coach Mike McConathy) told me,” said West, who said McConathy was crying too. “God works in mysterious ways, and I’m blessed that his plan was to allow me to come back and play here again.

“I wanted to leave the right way. Next year I will be able to help my teammates in spots they weren’t familiar with this year. I can help Zeek Woodley finish his career and have a complete senior night this year.”

NSU coach Mike McConathy, who told West of his status during a Monday lunch, is relieved to have one of the Demons’ greats back on the sideline for one more season.

“I’m thankful and grateful. I appreciate all the hard work (NSU compliance director) Dustin Eubanks put into our appeal,” McConathy said. “I’m ecstatic that a player and person of his caliber will be coming back to NSU as a Demon. He’s an incredible team leader.

“It’s really hard to explain the significance because our emotions are all over the place. But we told him God is good, and Jalan will be wearing a Demons’ uniform again.”

While West rehabbed his injury this season, he finished his college coursework and graduated with a general studies degree with a concentration in arts and communication. He’ll be enrolled in graduate school during his final season.

“My rehab is going pretty well, and I’m not trying to come back too soon or to prolong it and be behind,” West said. “My doctor said everything looks good, and I just started straight-line jogging and should be running in the next three weeks.”

Without West this past season, the Demons struggled to an 8-20 record, missing the conference tournament with a 5-13 league mark.

“It was a struggle this year for him to sit and watch as we struggled as a team,” McConathy said. “With Jalan being back, we have a chance to reunite this group and put ourselves into a position to get back to the NCAA Tournament and allow him to have another successful season.

“It’s good for him too because he’ll get as much exposure as possible before he moves on to his professional career. It will give him time to rehab as long as he needs to, get his game back to where it was and take it to greater heights. Coming back will allow him to show how good of a leader he is after sitting on the sidelines, which helped him become more vocal.”

Before his injury, West was a consensus top 100 senior (2015-16 class) in three different rankings and was rated as high as No. 50 by DraftExpress.com.

“My plan wasn’t to return because of that (improving professional standing). I wanted to come back for my teammates, my coaches, my family and myself,” West said. “I’ve done a lot of things here, but I want to do more.

“I think we can make it back to an NCAA Tournament. Coach Mike always says that you’ll never play with the exact same players again, so each team is different. I’m fortunate to come back and play with my old teammates, and I want to help bring back old memories and what Demon basketball is.”