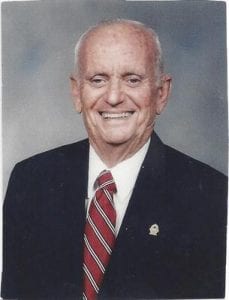 Albert Ray Turner, 90, passed away from respiratory failure on January 16, 2016. He was born in Quitman, Texas to Lawrence and Marzee Turner on December 11, 1925. Known to family members, classmates, and friends as Ray, Peewee, Buddy, or ARay, he was known around the world. Daddy, you said the first thing you did every day was to read the obituary to see if your name was in there—this is your day and we used all of your nicknames so there was no confusion.

Ray was a life-long Boy Scout, a WWII Veteran, a very active member of Lions Club, Masons, Methodist Church, Bossier Parish Sheriff’s Posse, Bossier Parish Community Services, and several other service organizations and programs. He steadfastly supported his community and always gave more than he took in everything he did. Peewee, as he was known on the job, worked for Texas Eastern gas pipeline company for 40 years and lived in cities along the pipeline from North Little Rock, AR, to Taft, TX, including Shreveport, LA, Baytown, Beaumont, and Bay City, TX. Every city became home for him and his family, and he jumped right into community service on day one in each home town. While all of his activities and work were important, he is going to be best remembered for his passion to laugh and to make other people laugh, his welcoming ways, giving out hugs to everyone, and desire to help anyone at any time. He will be missed!

He is preceded in death by his parents and infant son. He is survived by his beloved wife of 66 years Betty of North Little Rock; sister Mary Parker of Bossier City, LA; son Bert (Sally McQuie) of North Little Rock, daughter Cloy Neal (Gary) of Sherwood, AR, and son Hank of New Iberia, LA; as well as seven grandchildren and ten great grandchildren with at least one on the way; plus a host of loving nieces, nephews, cousins, in-laws, out-laws, and dear friends.

In lieu of flowers, memorials may be made to Lions Club or a charity of your choice .

Services will be held at Edmond’s Funeral Home in Jonesboro, LA, on January 20, 2016, at 2:00pm and he will be buried in the family plot in Jonesboro Cemetery.