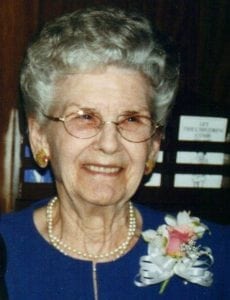 Bossier City, LA – Mrs. Anna Marie Gray Land passed away early Tuesday morning at the Brookdale facility where she had resided for several years in Bossier City. Graveside services will be 10 am Friday, February 2nd at Centuries Memorial on Mansfield Road with the Reverend Steve Riall of Saint Andrew Presbyterian Church officiating. A visitation will be held later in the day from 2 to 4 pm Friday at Saint Andrew on North Market in Shreveport.

Mrs. Land, known as BeBe to her grandchildren and eventually to her whole family, was born in Monroe, LA on February 15th, 1925 to Lola (Just) and Oscar Gray. BeBe had one brother, the late Bill Gray of El Dorado, AR and one sister, the late Martha Davis of Malvern, AR.

Later moving to Shreveport, Mrs. Land and her siblings all attended Fair Park High School until Bossier High School coach Clayton Cornish convinced her brother Bill to play football for the Bearkats. The school moved the Gray family from Shreveport to a home on Traffic Street in Bossier. Anna Marie joked many times about getting two high school diplomas from BHS, her own and her brother Bill’s from two years earlier since he had not bothered to attend the ceremony and pick his up.

Anna Marie married Carl Jack Land in San Diego, CA in 1944, leaving Bossier and riding a train out to the west coast to wed prior to Jack’s leaving for the Pacific theater in World War II. Jack survived the war and returned to Anna Marie and the pair were together 63 years until his passing in 2007. They would raise three children, all sons, who survive her. Ben and wife Julia Claire of Dixie; Gene and wife Lynda of Bossier City and Joe of Utopia, TX.

While raising her family Anna Marie was primarily a home maker, but worked as a switchboard operator for Lion Oil Company in El Dorado, AR and sold real estate for several firms in and around her Shreveport home. She enjoyed the outdoors, keeping a boat with her husband on Cross Lake while living on Michigan Avenue in the 1950s and later while living on Lake Murval near Carthage TX, following Jack’s retirement from Otis and Westinghouse Elevators. In the outdoors she not only taught her grandsons to “spit” on the hook to catch the biggest fish, but she also developed an amazing green thumb. Keeping a garden and dozens (if not hundreds) of flowers at every place she lived throughout her life.

Examples of her green thumb still survive today with “spurs” of her plants given as gifts and growing in homes of her sons and grandchildren. She truly excelled in the kitchen. Her children as well as several of her grandchildren all commented on what a great cook she was when asked what they remembered most about BeBe. No one ever visited her home without being offered some type of tasty treat to go with a pot of coffee she was eager to percolate, but those who came to visit early enough (around the time the sun rose) were often treated with a breakfast fit for a king, the staple of which was her biscuits and gravy.

Despite her culinary skills she was in great physical condition. It was normal to see her down on the floor playing with her great grandchildren well up into her 80s and then hopping up without a creak to go brew some coffee for the latest house guest. BeBe is survived by six grand children and 13 great-grand children including Clint Land and wife Jennifer parents of Kelly Brock, Sarah Beth and Casey Land of Shreveport, Carol Beth Land Ivory, parent of Ella Ivory of Houston, TX, Shannon Robertson and husband Patrick, parents of Michael and Kate Robertson of Blanchard, and Kendal Land and wife Lauren, parents of Jackson, Carlisle and Evie Land of Longview, TX.

Memorials may be made to Saint Andrew Presbyterian Church, Shreveport.