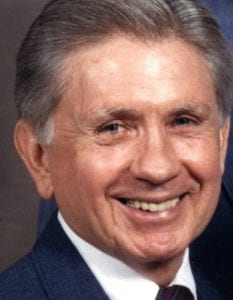 Graveside services for Binom R. Jenkins, age 85 of Kennedale, are scheduled for 1:00 PM Saturday, January 30, 2016 at the Mt. Sylvan Cemetery with Dr. Dan Curry officiating. Services are under the direction of Caudle-Rutledge-Daugherty Funeral Home in Lindale. Mr. Jenkins died Wednesday, January 27, 2016 in Mansfield. He was born in Allgood, TN on November 29, 1930 to the late Binom and Ruth (Nolen) Jenkins. He was a longtime resident of Bossier City, LA before moving to Kennedale, TX in 2012. Mr. Jenkins entered the United States Air Force in 1948, serving during the Korean and Vietnam wars, and retired in 1978 as a Chief Master Sargent. After retiring from the Air Force, he went to school and received his Master’s Degree in psychology. He worked with the Caddo Parrish school district as a school psychologist and retired from that in 2002. Mr. Jenkins was a long time member of the Barksdale Baptist Church in Bossier City, LA and was also a Mason and a Shriner. He was a strong Christian husband, father, brother, uncle, and grandfather. He was married to Jane Allred Jenkins from June 16, 1951 until her death on June 24, 2012. He was preceded in death by his two brothers, Joe and Conway Jenkins. He is survived by children, JaNae Jenkins Mundy and husband, Robert, of Kennedale, TX; Jeanie Jenkins of Shreveport, LA; and Tracy Jenkins of Bossier City, LA; grandchildren, Nicholas Jenkins of Bossier City, LA; Emily Jenkins of Bossier City, LA; and Violet Chargoy of Kennedale, TX.