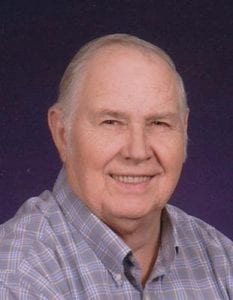 Services celebrating the life of Broadus Joel Smith will be held Saturday, January 16, 2016 at 2:00 p.m. at Hill Crest Funeral Home in the Chapel with interment following in Hill Crest Memorial Park. Officiats will be Kelley Corkern, Jimmy King and Paul Clark. The family will receive friends Friday, January 15 from 6:00 p.m.-8:00 p.m. at the funeral home. He was born December 31, 1940 in Greenville, South Carolina and died January 11, 2016 in Bossier City, La. Just like the oatmeal creme pies he loved so much, the middle was the best part!

He was married to his sweetheart for nearly 50 years and together they had three beautiful daughters. B.J. served in the United States Air Force for 22 years as a medic. His service allowed him to travel and experience many beautiful sights and cultures. He served in places including Japan, Libya, Iceland and of course stateside where he was able to assist in the birth of his youngest daughter in Florida. He made many friends that were more like family during his service.

After retiring from the Air Force, he started working for Willis Knighton as a security guard where his charming personality and witty sense of humor earned him popularity with all ranks of staff and personnel. He worked there for another 22 years before he retired to settle down at home and begin checking off his honey-do list.

B.J. was preceded in death by his parents Floyd and Pearl Smith, two brothers Lewis and Alton Smith and brother-in-law, James Tollison. He is survived by his wife, Sharon Smith; three daughters, Tina Smith of Bossier City, LA, Pam Holt and husband Mark and Melissa Anderson and husband Chad all of Blanchard, LA. Four Siblings, sisters Vera Bagwell and husband Jewell, Evelyn Tollison, Jan McAtee and husband Steve; one brother Irvin Ray Smith, Sr. and wife Cornelia all of Greenville, SC and his brother-in-law, Donald Tullis and wife Beverly, 8 grandchildren Savannah Stewart and husband Markus, Morgan Parr and husband Jeremy, Shelby Holt, Cpl. Lane Holt, and Jonathan Holt, Joel, Jacob, and Joshua Anderson and 3 great grandchildren, Allison and Samuel Stewart and Landon Parr and his 3 puppies, Daisy, Buddy and Archie. Also left to cherish his memory are Sheila and Scott Miller. He was deeply loved and will be missed by all who knew him.