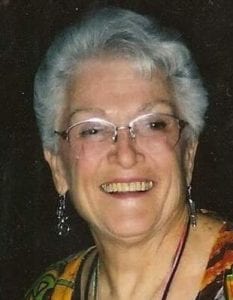 She had been ill for just a short time, but her heart had been broken since the death of her husband, Edward “Gene” Allen, eight months ago. She went peacefully from her home, which was her only request. She was surrounded by her family and so much love. She and Gene met on Valentine’s Day 70 years ago, and she joined him on Valentine’s Day 2016.

Born in 1928, in Parsons, Kansas to Willard and Marguerite Sage, she settled in Breckenridge, Missouri where she graduated from high school and met Edward “Gene” Eugene Allen– her life companion.

They lived and worked on farms in Missouri and three sons—Gary, David, and Bruce—were added to their family. In 1953 she followed Gene to Japan where they lived for two years as Gene served in the Air Force. Upon returning stateside, she started singing in the choir in the Methodist Church in Cooter, Missouri. Their fourth son, Eric joined them shortly after moving to Satellite Beach, Florida at an exciting time at Cape Canaveral. After a three-year tour in Bitburg, Germany and a stateside tour in Oklahoma, she planted roots in Bossier City in 1968.

Bowling, directing choir, and designing stained glass became her passions until recent illness restricted her actions. Carol and Ed (Gene) never missed a cultural event and traveled the world with the “Bitburg Bunch.” While art and music were a big part of her life, her true love was for her home and family. She was proud of her sons and grand children. Her faith in God was the key to her life well lived.

Carol was preceded in death by her husband of 68 years, ” Ed” “Gene” Allen and her parents Willard and Marguerite Sage.

The family would like to thank our special “Angel on earth,” Sheira Foster, who cared for Carol and Ed during their last illnesses.