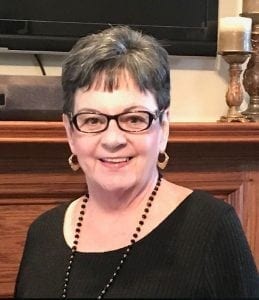 Charlotte Cole Durrett aka “Honey”, a native of Baton Rouge, LA, former resident of New Roads, LA and most currently a resident of Bossier City, LA, passed away on May 6, 2018 at the age of 69 after complications with COPD.

Charlotte was born March 7, 1949 to Hoyt Leroy Cole and Vergie Hazel Cole. She was a graduate of Baton Rouge High School. Her organization and attention to detail allowed her to excel as a bookkeeper for many companies during her career. After 28 years in the work force she retired.

Charlotte had the gift of caretaking. She filled her days with insuring all whom she came in contact with were well fed and well loved. Charlotte loved planting and enjoying the outdoors. She said often that there was something therapeutic about digging in the dirt. As her health began to decline it was one of the things that she missed most.

Upon her husband Roy’s death in 2016, she moved to Bossier City, LA to live with her daughter, Robyn Jacobs and her husband Jake, along with her grandsons, Garrett and Gavin.

The last year and a half was filled with attending River Valley Church, watching her grandsons’ sporting events, and making memories with new friends and family. Most recently, Charlotte herself became a large part of her grandson, Garrett’s journey on American Idol.

She was featured in commercials and episodes of the reality T.V. show. Honey, as her grandsons called her, showed America what love in action looks like. In spite of her health issues with COPD, she manage to travel to L.A. to see Garrett perform on the Idol stage.

Honey loved on every single person she met during this process. That was the thing about Honey, she loved with every single fiber of her being, always making sure that you saw Jesus through her actions. Through that American Idol journey, she became America’s Honey too!

Honey will be missed every single day, but her family and friends find comfort in knowing that it is not “Good-bye,” but “See you later!” She has been healed and made whole again by her Heavenly Father.

There will be a graveside service for close family and friends on Saturday, May 12, 2018 at Greenoaks Memorial Park beginning at 10 am.

In lieu of flowers please send donations to The Providence House (www.theprovidencehouse.com), The Hub Ministries—Purchased Outreach (www.thehubministries.org) or The COPD Foundation (www.copdfoundation.org).