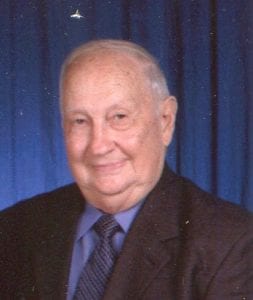 Claude Eugene Sharrah, 88 of Van Buren passed away Tuesday, December 27, 2016 in a local hospital. He was a 27 year veteran of the U.S. Air Force; Veteran of WWII, Korean and Vietnam Wars; he was a former employee of the Army/Air Force Exchange System. He was preceded in death by his first wife, June; one daughter, Nancy Russo and one son, Larry Sharrah; one daughter-in-law, Polly Sharrah; both parents, Clarence and Margaret (Blair) Sharrah; six sisters, Mae Hodges, Myrtle Turner, Ada, Ruth and Grace Lingo and Ruby Anderson; two brothers, Harvey and Virgil Sharrah.

Funeral service will be at 2:00 P.M. Saturday, December 31, 2016 at Trinity Episcopal Church in Van Buren with burial at Hill Crest Cemetery 1:00 P.M. Wednesday, January 4, 2016 in Haughton, Louisiana with full military honors under the direction of Ocker Funeral Home in Van Buren.

Pallbearers will be his family members.

In lieu of flowers the family request memorial contribution to be made Trinity Episcopal Church P.O. Box 382 Van Buren, Arkansas 72956 or to the charity of your choice.

The family appreciates the doctors, nurses and staff who took care of our loved one at the time of his need at Sparks Regional Hospital.