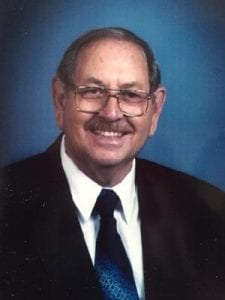 HAUGHTON, LA – Services celebrating the life of Dale E. Jacks, 85, will be held at 2:00 p.m. on Sunday, January, 17, 2016 with daughter Denise Jacks officiating. Interment with military honors will follow at Hill Crest Memorial Park. The family will be receiving friends on Saturday, January 16, 2016 from 4:00 p.m. until 6:00 p.m. at the funeral home.

Dale was born to Louie and Miriam Jacks on April 19, 1930 in Trechade, New Mexico. He died on January 14, 2016 in the home he designed just the way he and his loving wife wanted with her and other family members by his side. He joined the United States Army at the age of 17. He later enlisted in the United States Air Force where he served with distinction for 24 years. He retired from Barksdale Air Force Base in 1973. In 1974, he started American Air Conditioning where he worked alongside his wife and son before retiring in 2012.

He met Betty Zane Wann in Fort Worth, Texas in 1953. He married her and whisked her off to France, where their twin sons were born. Their daughter was later born in Kansas. They were married for 63 years and he often said “The best thing I ever did was marry your mother.” Dale worked hard all of his life, at work and at home. He loved remodeling his home, working in his yard, and traveling. In his younger years, Dale was a man of faith and a deacon in the Baptist church.

He was preceded in death by his parents, Louie and Miriam Jacks; his sisters, Pat Kenner and Ruth.

Condolences may be shared with the family at www.hillcrestmemorialfh.com