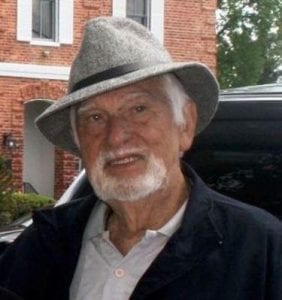 BOSSIER CITY, LA – We have lost another member of the “Greatest Generation.” Donald Lloyd Wainwright, born January 26,1927 died on February 2, 2016 In the Northwest Louisiana War Veterans Home in Bossier City. Except for his time in the Navy during WWII and attending school in East Texas, he lived in Louisiana. He spent long enough in Texas to meet and marry Peggy Neumeyer and to father his first child, Michael. He returned to Baton Rouge where Deborah Ann Wainwright, Douglas Randal Wainwright and Donna Wainwright Mayeux joined the family.

As a child of the Great Depression and a teenage veteran, Don formed a strong work ethic that served his family well. He worked at Kornmeyer’s in Baton Rouge and Hemenway Furniture in Shreveport. Later the family owned and operated Danbi’s in East Gate Center and Louisiana Soil Products in Springhill. That drive did not deter him from cocking his navy cap to make him stand out from his classmates in his training class picture. Likewise in later life no amount of discouragement kept him from donning his bermuda shorts Santa suit and parading around the fitness center. By the time we first learned his high school nickname was “Ducky” we realized it was appropriate.

He was preceded in death by his wife, Peggy and daughter Debi, as well as his parents, Douglas and Lucille, and his brother Darold. His children are scattered from North Carolina, to Missouri, to Seattle. In addition to his remaining children he is also survived by nine grandchildren and eight great-grandchildren.

Don asked that his body be donated to LSU Medical School for training and research. Our family will be eternally grateful to Brenda Lewis for her compassion and help. We also thank Bunkie Bryant for his loyal friendship to Dad. His family encourages those so inclined to honor him with a contribution to the Shreveport Rescue Mission.