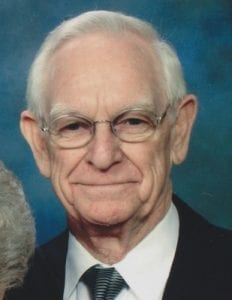 A memorial service celebrating the life of Donald Wayne Tompkins will be held at 2:00 on Friday, December 18, 2015 at The Church of the Cross with Reverend Andy Harris, Pastor, officiating. Interment will follow at Hillcrest Memorial Park, Haughton, LA with full military honors. Visitation will be Thursday, December 17, 2015 from 6:00PM until 8:00PM at Hillcrest Memorial Chapel.

Don was born on February 18, 1929 in Sawtelle, California and went to be with the Lord on Sunday, December 13, 2015. He was a devoted husband, father, grandfather and great-grandfather. His family and his church meant everything to him. He retired from the Air Force after 20 years of service. He proudly served his country in World War II. He then worked for BlueCross and BlueShield of Louisiana.

He was preceded in death by his wife of 64 years, Ruth Tompkins, a daughter Diane, a great-grandson, Luke Tompkins, his parents Joseph and Alto Tompkins, his brother, Joseph, Jr.

In lieu of flowers, memorials can be made to The Church of the Cross Building Fund.

Memories may be shared with the family at www.hillcrestmemorialfh.com